Employees for the state of Michigan are represented by six main unions. Five of these were affected when the state passed a right-to-work law that went into effect in 2013. (The other is a union for state police officers, who were exempted from the law.)

Here is a look at the percentage of workers choosing to remain members of these unions after they were allowed to leave under the right-to-work law. The data cover 2013-18 and comes from reports filed by the Michigan Civil Service Commission. 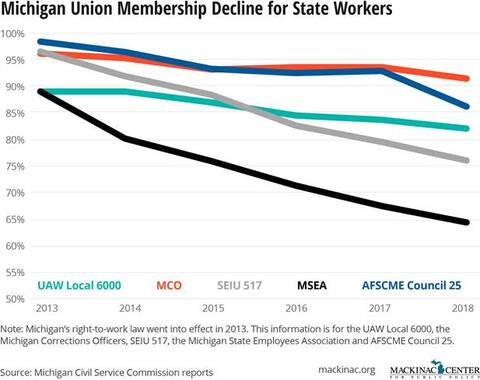 Right-to-work has had different effects on the unions, but all have lost a sizable portion of their members. This suggests that thousands of state employees benefitted from right-to-work by no longer being forced to financial support a union they do not want to affiliate with.