While Michigan has fewer people moving out of the state than it used to, it’s still not performing that well when it comes to migration. A look across the nation shows there are some things that better public policy can do to turn this around.

The Census Bureau released a report last month that showed that 243,000 more people have moved out of Michigan to other states since 2010 than have moved into Michigan. Last year contributed 17,000 individuals to that number.

People move to places that have good job opportunities, so they tend to move to areas that have good job growth. The two measures move with each other pretty well: States whose economies grow at a faster rate generally attract more people from other states. 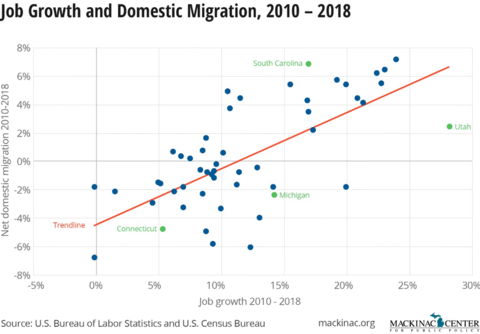 Michigan has been better than most when it comes to job growth, but this hasn’t translated yet into more residents moving in from other states. The state economy added over a half million jobs and beat the national average from 2010 to 2018. Yet it still lost 2.5 percent of its population to other states. Michigan’s recovery put a lot of people to work, but it was able to fill those jobs with people already in the state. If the economy here keeps adding jobs, this is likely to change because the state’s unemployment rate is nearing its historic low.

Attracting new residents can be a challenge when other states are also at or near record lows. Michigan has an advantage in that wages are now higher than the national average when adjusted for the cost of living. The prospect of easier-to-find employment at good wages is a strong motivator for people to move.

It also seems that people don’t like being taxed, and they prefer places with broad bases and low rates. The Tax Foundation ranks states based on those criteria, and states rated highly attract more people than those with low ratings. 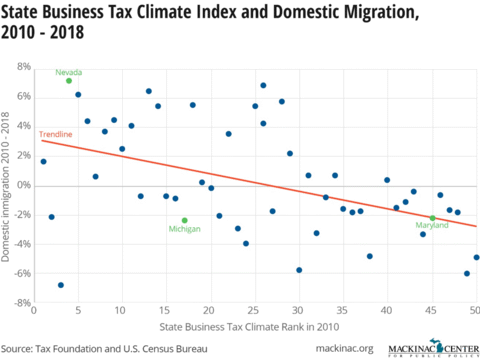 Michigan is on track to pay off its unemployment insurance debt and the accompanying surtaxes to pay for it, something that will help improve its ranking. The state can further improve by lowering its income tax rate.

In 2008 the Mackinac Center for Public Policy studied the factors that determine interstate migration. We found that for every 10 percent difference in per-capita personal taxes between Michigan and other states, there was an associated loss of 4,700 people every year thereafter. In other words, the 2007 personal income tax hike of 11.5 percent contributed to Michigan’s population losses since then.

Of course, taxes aren’t the only thing that matters to the people who could become Michigan residents. Others may include the state’s labor market, relative economic conditions, per-capita incomes, the moving distance to a new home and even the generosity of the state’s public assistance. Aside from economic factors, amenities — such as number of days of sunshine or average temperature and access to large bodies of water — matter too.

All of this can be summed up in terms of opportunity, including economic opportunity. For years the Mackinac Center has argued that Michigan needs to become an opportunity state. We have natural advantages — like the Great Lakes — but are hamstrung by cold winters and tax burdens that serve to minimize our relative attractiveness to potential residents. Some things can be controlled while others cannot; good public policy is something that can be.