With elections approaching this fall, Michigan's economy is being heavily analyzed.

And the federal government gives varying estimates of how well Michigan is doing in employment.

Consider the two monthly employment surveys the U.S. Bureau of Labor Statistics does. Michigan's results differ depending on whether it's the household survey (about 60,000 households) or the establishment survey (about 440,000 individual worksites).

In that April-to-April calculation, Michigan exceeded the U.S. in percentage increase in the household survey, while in the establishment survey, the Michigan growth lagged behind the national average.

"Some people are saying Michigan's economy has not improved above the national average," said James Hohman, assistant director of fiscal policy at the Mackinac Center for Public Policy. "But it depends on which numbers you check."

"People can argue about how much Gov. Snyder's policies have influenced the overall trends, but they should acknowledge that the state has experienced solid job recovery," Hohman said. 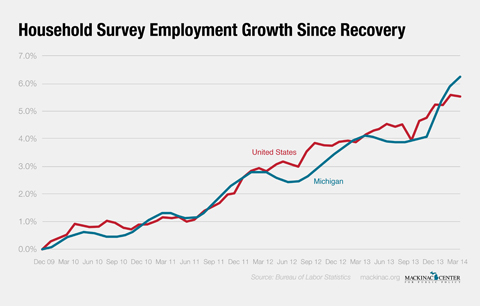 Michigan Among the Leaders In Job Growth

Despite Popular Thinking, Michigan Economy Is Not Determined By Automotive Industry

How Much of Michigan's Troubles Can Be Blamed on the Auto Industry?

Second Wave Agony: Maybe The State’s Epidemic Policy Is To Blame, Not Its People

Two Or More People Meet Outside Homes, Not Wearing Masks, Subject To $1,000 Fine