In a 2013 video, Steve Cook, then president of the Michigan Education Association, was asked what he expected for the union’s membership numbers under the right-to-work law just going into effect then.

Cook said he wouldn’t be surprised if his union lost no members.

When asked what his worst fear was about the new law he said, “Worst fear – thousands. That’s everybody’s worst fear.”

Right-to-work means employers cannot require employees to pay union dues as a condition of employment. Four years after this policy became law in Michigan, the MEA has lost 27,609 dues-paying members, according to the most recent union filings with the U.S. Labor Department, released this week.

The MEA has experienced steep membership declines each year since the law was enacted in 2012. Active membership is down 25 percent since right-to-work became law. 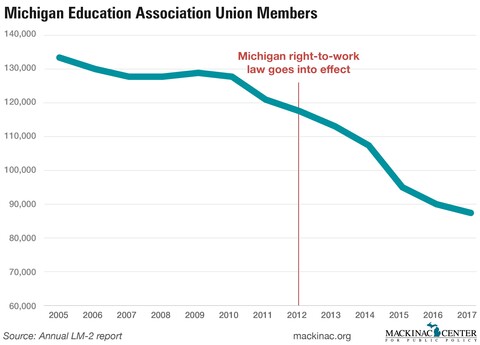 Though Michigan’s right-to-work law was enacted in December 2012, it did not become effective until the end of March 2013. Even then, it did not apply to employees who were covered by a collective bargaining agreement until that contract expired. Before the law’s effective date, many local school boards went along with the union in signing long-term contracts that meant employees would have to keep paying dues — sometimes for another 10 years.

The contract extensions have been challenged in court and the Michigan Supreme Court recently upheld a Court of Appeals judgement that a 10-year extension is invalid. It is likely that the number of dues-paying MEA members would have fallen further without this device.