The state does a lot with its fiscal policy, and people — especially those providing services paid for by taxpayers — are concerned about how the COVID-19 pandemic will affect them. New revenue estimates gave the first look at how much the loss of activity because of the governor’s orders and people’s personal precautions affect the state’s budget. Revenues are estimated to go back to fiscal year 2014-15 levels in the current year and recover from there.

Officials estimated the revenue going to two of the state’s major funds, which account for the majority of state tax revenue. Instead of expecting these funds to collect $24.9 billion in revenue, they now expect them to collect $21.7 billion in the current fiscal year. This means that the increases over the five years have been erased. Or with a standard inflation adjustment, revenue is expected to go back to 2011 levels.

It’s unsurprising that revenue is expected to decline, given that the governor deliberately shut down much of the economic interaction between people, in an attempt to stop the spread of the novel coronavirus. Perhaps these losses may be mitigated if the governor decides that additional economic activity can be performed safely.

The decline is expected to be short-lived, however. Officials expect revenue to grow 3.5% in the upcoming fiscal year.

Lawmakers have already passed a budget for this year, based on earlier, higher estimates of revenue. It is the governor’s responsibility to propose reductions to the Legislature’s appropriations committees when revenue falls below expectations, according to Article V, Sec. 20 of the state constitution.

Naturally, a 13% mid-year reduction has some people worried. Yet this should be tolerable and not require raising taxes or going into debt.

The state has over $1 billion saved for such an occasion. The federal government has also already provided some relief for Medicaid and education expenses, and it can loosen restrictions on some other assistance that has already been made available.

Even with extra cash, lawmakers ought to look within the state budget for savings. As we’ve pointed out repeatedly, the state’s business subsidy programs are ineffective, unfair and expensive and should be reconsidered. There are other ideas to save money as well. After years of growth in state budgets, the expected declines should cause lawmakers to reassess their priorities and ensure that residents are getting efficient and effective government for their taxes.

Compiling annual estimates like this recent one makes the revenue changes seem larger than they are. A look at recent growth can put the reassessment in context. The state budget has been increasing since fiscal year 2009-10, and the money from state taxes and fees is up $9.5 billion since then, or 16% above inflation. To add up each annual year’s increase above the fiscal year 2009-10 levels would mean that the state has increased its spending by $51.5 billion since then, but that’s rarely used as a standard of comparison.

Perhaps people are more sensitive to losses rather than gains. The chart below shows the same information about revenue gains and losses, just with different base years of comparison. The orange bars compare revenue for each year to the low of fiscal year 2010-11 while the gray bars compare to highs in fiscal year 2018-19, with the numbers in the blue box being the new projections. 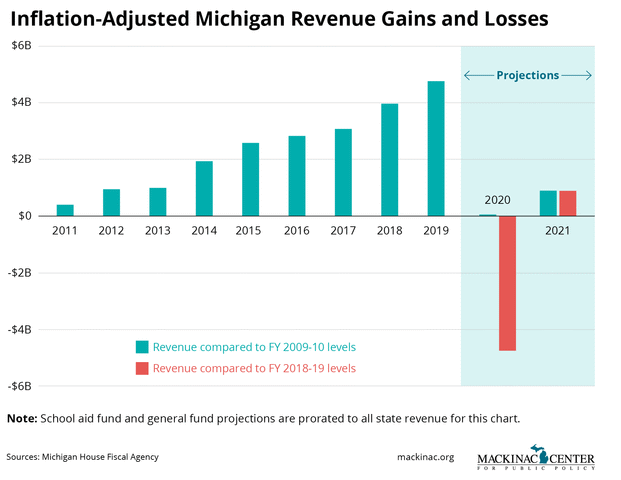 The current year budget will not likely have to be reduced by $3.0 billion even though revenue is expected to drop by that much. That’s because lawmakers didn’t pass budgets to spend all of their revenue. Budget disputes saw to that. The most recent budget bill called for $312.3 million in extra spending. It was passed in March and the governor approved it, with $167.6 million of vetoes. Every dollar lawmakers didn’t spend provides extra breathing room for administrators as they prepare for coronavirus-caused reductions.

The next year’s budget hasn’t been determined, either. It’s tough to cut a budget that doesn’t exist yet. Lawmakers have until October to come up with ideas about how the state will live within its resources for the 2020-21 fiscal year, which are now expected to be $754.7 million more than current-year revenue, a 3.5% increase.

Lawmakers will be tempted to defer fixes to fiscal problems through taking on debt or raising taxes as they recognize the costs of the pandemic and the governor-mandated shutdown. But they can continue to live within the resources they have.