Health insurance costs for public school employees have increased for the past two years, after a five-year period they were on the decline.

For the 2016-17 school year, public school districts spent a total of $1.6 billion on employee health insurance, according to the Michigan Department of Education. This is at least $50 million more than each of the previous four years. But it’s still $400 million less than the roughly $2.0 billion spent on health care costs for the 2009-10 school year.

MESSA costs districts about 10 to 12 percent more than non-MESSA coverage, according to an analysis by Ben DeGrow, an education policy analyst at the Mackinac Center for Public Policy.

DeGrow also found that the number of districts buying insurance from MESSA was largely unchanged between 2011 and 2017. 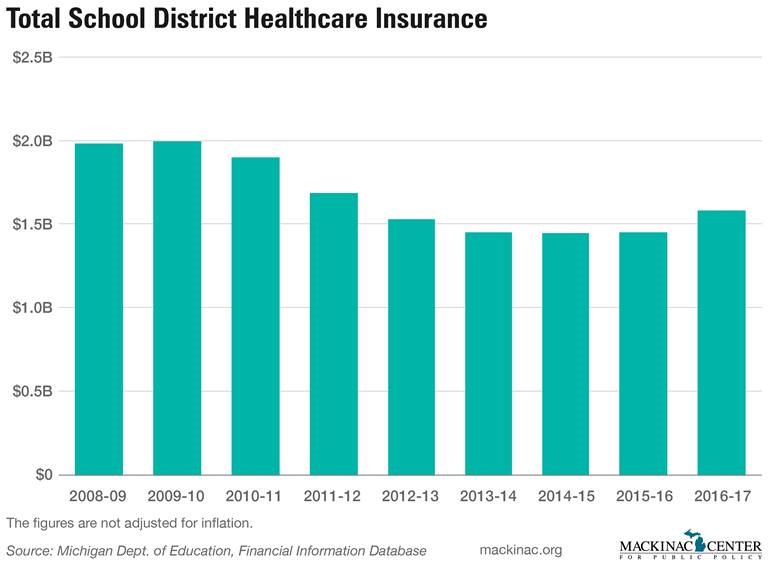 The figures are based on data, collected from 230 school districts that employ about 40 percent of the state’s K-12 school employees. The data on insurance premiums indicates that the non-MESSA individual health plan costs $999.48 less each year than a comparable MESSA plan. Districts that buy coverage from a non-MESSA insurer for a two-person policy save $1,953.72 compared to buying from MESSA. They save $2,757.36 a year when they buy a family plan.

Under a law enacted in 2011, school districts are subject to caps on how much they pay for employee health insurance. They can either require employees to pick up 20 percent of the costs or accept a hard cap on the dollar amount of the coverage they provide.

The hard cap originally limited premiums to $5,500 for a single person, $11,000 for couples and $15,000 for families. These caps rise with inflation, and in 2013 a fourth type over coverage was authorized, an individual-plus-spouse plan capped at $12,250, also indexed to inflation.

Michael Van Beek, the director of research at the Mackinac Center, said he believes that the Affordable Care Act, or Obamacare, may also have influenced health care costs. Van Beek said that he believes the expanded list of “essential benefits” mandated by Obamacare has driven up costs, since it began going into effect after Michigan lawmakers adopted these coverage cost caps.