North American Van Lines released the 2022 edition of its annual migration report, which tracks migration patterns across the states. Michigan was the fifth most-left state in 2022, when the number of people who left the state are compared to the number who moved in.

Of the people who moved across one of Michigan’s borders last year, 59% left the state and 41% moved in. Illinois, however, was the most-left state in the nation, with 65% of its movers leaving the Land of Lincoln. California was second, with 63% of its moves being outbound. California was followed by New Jersey, at 62% of moves being outbound, and Pennsylvania, at 60%.

On the opposite end was South Carolina, with 68% of the moves involving the Palmetto State being inbound. North Carolina and Tennessee are next at 64%. Arizona is fourth at 57%, and Florida fifth at 55%.

“Whether it’s a coincidence or not, many of these states were among the first to lessen Covid-19 regulations,” the moving company notes. 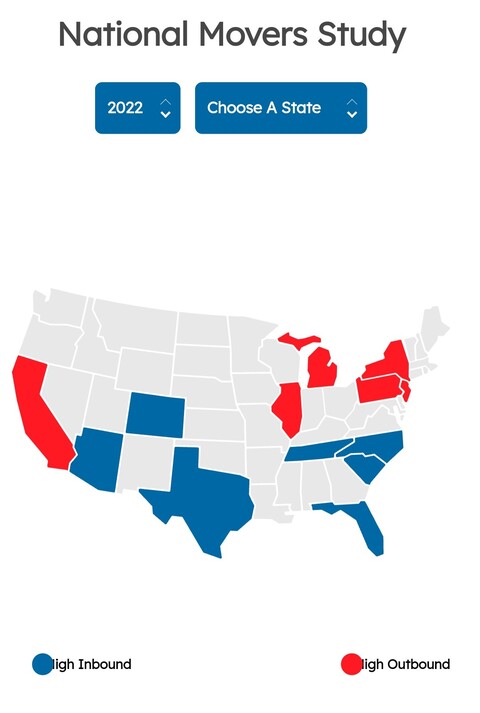 Michigan had America’s longest and harshest lockdowns in 2020.

The moving company also speculates that states with a higher percentage of inbound moves had a smaller tax burden.

Michigan has never had a year since 2011 during which it gained more people than it lost, according to the annual reports from the moving company.

“I hope this won’t be a repeat of 2000s when Michigan bled its people to opportunity states like Florida and Texas,” says Michael LaFaive, senior director of fiscal policy at the Mackinac Center for Public Policy.

“Interstate migration may be the best measure of quality-of-life issues,” LaFaive says. “People vote with their feet, and they seem to be voting for other states.”