Michigan leaders have long supported an idea for which there is little evidence: Increased spending on higher education will lead to a more educated workforce.

State representatives in May proposed expanding the pool of people who could take part in the Michigan Reconnect program, which offers free or deeply discounted tuition for associate degrees or skilled trades certification programs. Wayne County and the Southeast Michigan Community Alliance announced plans to spend $50 million on workforce development initiatives on June 2, including an effort called the Subsidized Training & Employment Program. The program will fund paid skills training aimed at increasing the supply of workers with certain skills.

But research by the Mackinac Center for Public Policy has uncovered little support for the belief that higher per-capita state appropriations on education can raise the percentage of college graduates living in a state.

Massachusetts is the state with the highest percentage of residents with a college degree, at 44.5%, but it only spends about $300 per resident on higher education. That is the same amount as West Virginia, which has the nation’s lowest educational attainment, at only 21.3% of the population earning a college degree. 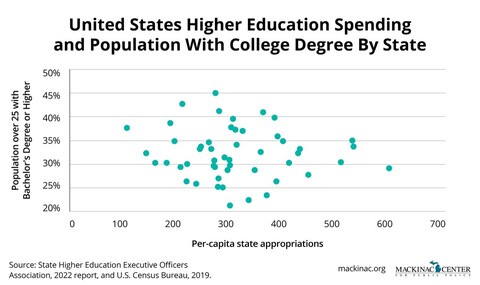 “The notion that education alone is necessary is faulty. It is one aspect of attracting workers to a state. Higher education costs money, and we have to tax people very high amounts to fund it, which is not very attractive,” Richard Vedder, an economist at Ohio University, told Michigan Capitol Confidential. “States with low tax levels attract in-migration, more economic and population growth. States without income tax, such as Tennessee, Texas, Florida, Nevada are gaining population and attracting skilled people, who are leaving states like New York and California, with high taxes.”

“Michigan has been passed by Georgia and Kentucky in the past 10 years of educational attainment, and Tennessee is catching up,” Business Leaders for Michigan announced in its recent report, Compete to Win. U.S. Census Bureau numbers show that Michigan still has a higher percentage of high school graduates than all three states, and a higher percentage of bachelor’s degree holders than Kentucky and Tennessee. But Southern states have won prominent high-skill economic projects that were traditionally associated with Michigan. Dearborn-based Ford Motor Co. partnered with SK Innovation Co. in September 2021 to build facilities in Tennessee and Kentucky, creating 11,000 jobs.

“Higher education’s hold over the public may have peaked,” Vedder said. “In the last five to ten years, there has been a wavering in the traditional view that everyone needs to go to college to be a success. Prominent firms, especially in the tech industry, are no longer requiring college degrees. If there are bright, hard-working individuals, can’t they learn on the job?”

General Motors recently ended its requirement of a four-year degree for many jobs.

The argument that increased educational spending will result in a more productive workforce has been raised ever since Harvard opened in 1636, Vedder said. But the cost to attend colleges and universities continues to rise, and enrolled students often fail to graduate within four years. Others, who graduate, face underemployment after receiving their degree. This leads some students and others to ask whether post-secondary education is worth it.

“There is a host of factors that impact economic development, and education is just one. Michigan has long prided itself, with some justification in my opinion, on its system of higher education,” Vedder said. “University of Michigan has been rated in the top ten colleges in America, and this does help Michigan’s image of showing that we are not a run-down factory state. But do we really need five universities in the metro Detroit area as the population of the Detroit metropolitan stagnates and declines? These universities come at an enormous cost to tax payers.”

In her 2019 State of the State address, Gov. Gretchen Whitmer introduced the Sixty by 30 program. The program’s website states that Michigan’s goal is to “increase the number of working-age adults with a skill certificate or college degree from 49% today to 60% by 2030.” It also warns, “Michigan ranks 37th nationally for education attainment. We’re below average in the Great Lakes region.”

The program proposes to close the skills gap. “Jobs requiring skilled employees today, as well as jobs on the horizon, demand greater education and training than ever before,” the program says. “Increasingly, the best jobs require more than a high school diploma.”

Vedder said he is skeptical of the 60% goal.

“Who knows what the optimal percentage of people with a degree is? Does Gov. Whitmer know?” Vedder said. “There are certain advantages to having aspirations, and having the public think about higher education, but over-promoting it can lead to disappointments. About 40% of college students don’t graduate within six years, and another quarter are under-employed.”

The push for increased spending for higher education is a national phenomenon: 38 governors spoke about post-high school funding in their 2022 State of the State address. Previously, the discussion concerning higher education focused on creating opportunity, but the struggling economy has turned it to training students for fields with labor shortages.

“There’s a lot of waste going on in universities that is not being helped by governors pushing everyone to go to college instead of considering other options,” Vedder said.