Most Michigan school district and union officials would have you believe that Gov. Gretchen Whitmer’s K-12 budget proposal represents a dramatic break from recent history. She calls for a sizeable increase in spending, one that is similar to what the state has been adding in recent years. It is also less of an increase than what lawmakers added two years ago.

The governor’s union allies, decked out in red, gathered at the state Capitol last week to rally for her budget plan. The Detroit Free Press described Whitmer’s proposal in momentous terms: “It would pump $526 million, or 3.5%, more into the K-12 budget, which would be the largest increase in classroom spending in 18 years when retirement costs are not counted.”

In recent years, the state has set aside large sums to fulfill the promises it has made, through MPSERS, to pay pensions to school employees. Anyone who compares one budget to the next must take that money into account. The extra money for pensions can be used right alongside other school aid dollars to pay for the expenses of running a school district. (By contrast, most charter public schools do not participate in the state-run pension system and receive no state money to offer retirement income to their employees.)

The $526 million increase highlighted in the Free Press article includes an extra $87 million set aside to cover MPSERS promises. If the article is going to credit this money to Whitmer’s increase, it should do the same for MPSERS funding her predecessor proposed.

The $526 million also includes federal education dollars that get incorporated into the final state budget. Neither state lawmakers nor the governor has a direct say in deciding how much money Michigan gets from the federal treasury. So, any description of year-to-year changes in state funding for schools should exclude federal funds. That reduces Whitmer’s proposal from $526 million to $523 million, but it does raise the increase in state dollars to 4% over the last budget enacted under Gov. Rick Snyder.

Taking federal dollars out of the calculation, Whitmer’s proposal falls short in percentage terms of the K-12 budget increase adopted 18 years ago. But one doesn’t have to go that far in the past to find another increase that exceeds what Whitmer has asked for. Two years ago, the school aid budget approved by Snyder and the Republican Legislature boosted state K-12 funding by $632.6 million, or 5.13%. That increase surpasses Whitmer’s plan by nearly $110 million, or more than a full percentage point. 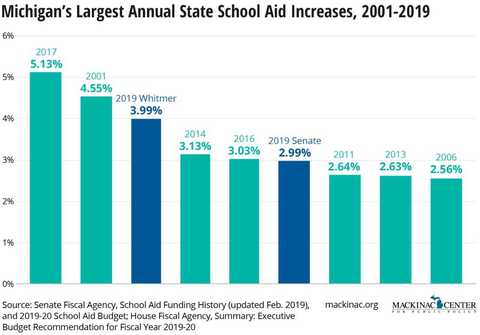 Despite these facts, many education officials and labor groups have drawn from the same script to give the current governor’s proposal exaggerated praise:

The terms “game-changing” and “historic” clearly overstate the matter, when we compare Whitmer’s proposal to recent budgets. Yes, if the governor’s education budget is adopted as submitted, it would produce one of Michigan’s largest increases since 2000. That increase would not, though, be the largest, nor would it be that far outside the norm.

The same could be said of the $395 million increase approved by the Senate. And even the $203 million increase that cleared the House — panned by the public education establishment — would rank near the middle of the last 20 years’ budgets, ahead of all but two school aid budgets passed during the Granholm administration.

Whatever Michigan ends up spending, the school budget will likely fall somewhere between the ones proposed by the House and the governor. That means 2019 will be the 10th straight year that Michigan raises state aid to K-12 education. This will happen even as student achievement lags, enrollment continues to fall and the governor pushes to raise taxes to help cover the extra spending. There’s no reason to expect the next budget increase will have a significantly different impact than previous ones.