Six years ago I criticized a chart that President Obama published about job growth. It implied that he was single-handedly responsible for ending the Great Recession. In presenting the same information in a slightly different manner, the data suggested that the recession continued to intensify for months after the president took office. It’s worth a second look with new data and a new administration.

Policy is important and can improve or hamper the direction of the economy. And presidents also have the ability to wreck the U.S. economy through the vast regulatory, trade and military powers that Congress has deferred to them. But growth comes from the ground up, from individuals finding better ways to give people what they want. Presidents cannot do that for them.

This updated chart of the exact same phenomenon emphasizes that job growth is less partisan than is appreciated. Job growth has remained within a consistent monthly growth range over a period that spanned three different presidential administrations and includes the Great Recession. 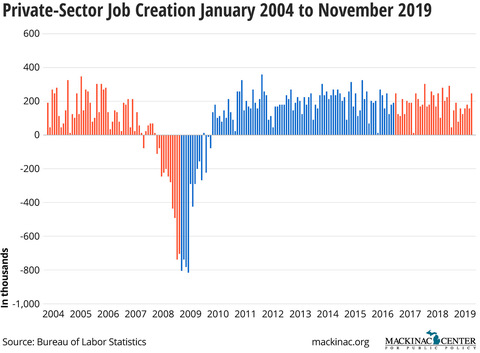 And this graph displays the similar data in a different format. It shows a steady increase in the number of private sector jobs in America — a trend that no one politician can take credit for over the period. 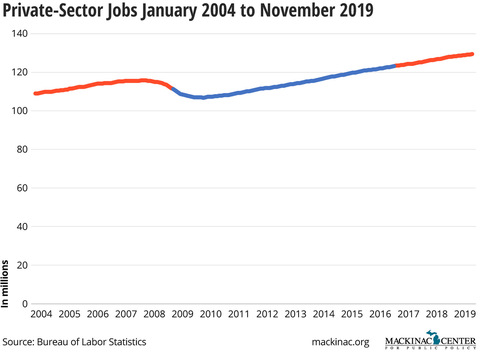 Another interpretation could be that people are open to a change in government leadership if more people are losing jobs than gaining them. This would mean that changes in job growth cause changes in presidents more than presidents create jobs.

Regardless, presidents receive too much credit and too much blame for changes in monthly job reports. Their policies matter to the economy, but so do entrepreneurs and business managers who do the heavy lifting of economic growth. It would be better to stop providing instant partisan interpretations of job trends.