In 2012, the Michigan branch of the Service Employees International Union representing home health care workers was riding high. It had 55,000 members, brought in $22 million annually and was able to spend nearly $3.5 million on politics.

Then it all came crashing down. Five years later, the union is a shell of its former self. Membership plunged to under 10,000. Revenue is less than one-third what it was at its peak. Political spending bottomed out at less than 5 percent of what it once was. And the union is in an emergency trusteeship to investigate potential financial malpractice.

What led to such a swift downfall? Well, when health care workers were provided a choice about supporting the SEIU, they responded by opting out of the union in spades. The Michigan Legislature empowered this choice by ending the “dues skim” and then passing right-to-work.

In 2005, former Michigan Gov. Jennifer Granholm worked with the SEIU to “organize” home caregivers. This skyrocketed the union’s membership, allowing them to skim “dues” money directly from the Medicaid checks paid out to disabled residents. The vast majority of the people forcefully unionized were friends or relatives of these Medicaid recipients, but were improperly classified as “government employees” so that the SEIU could claim to be representing them and collect dues from them.

In 2012, the Legislature and Gov. Snyder passed a law ending the scheme, which was taking $6 million annually from Medicaid recipients. SEIU Healthcare-Michigan then tried to pass a ballot proposal, which would have enshrined this scheme in the Michigan Constitution. But Proposal 4 of 2012 went down overwhelmingly and the “dues skim” ended officially in 2013.

In the meantime, state legislators passed a right-to-work bill in 2012 which went into effect in 2013. A U.S. Supreme Court decision ultimately overruled similar “dues skim” agreements around the nation, but right-to-work gave these workers the ability to opt out of having to financially support the union if they didn’t want to.

These two bills gave home caregivers a choice. If they believed the SEIU was doing a good job “representing” them, they could freely write them a check. If they did not, they could withhold funding. The results are in:

The union saw a decline in membership of 83 percent from its peak. 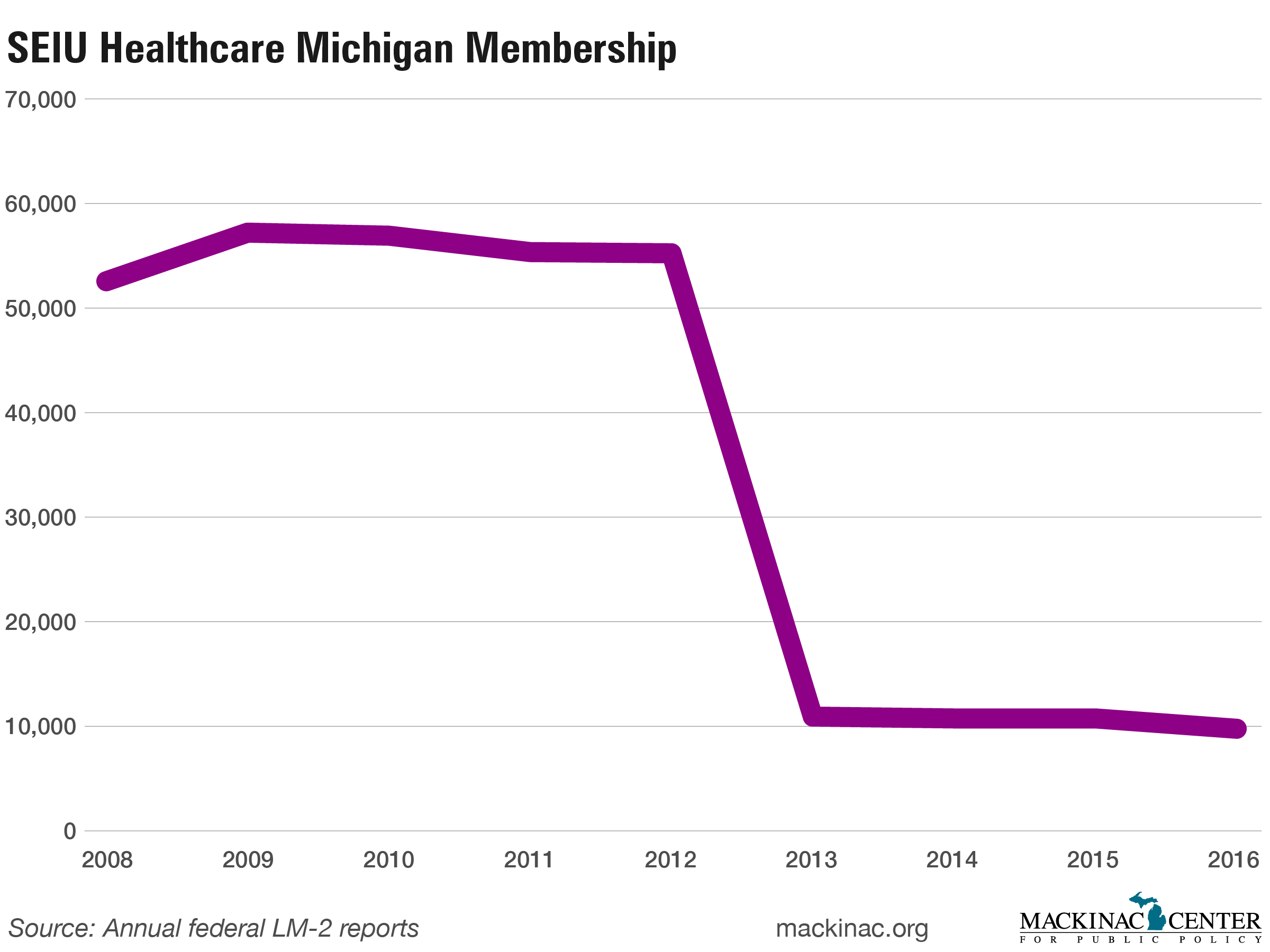 This has led to revenue declining by 69 percent from its peak. 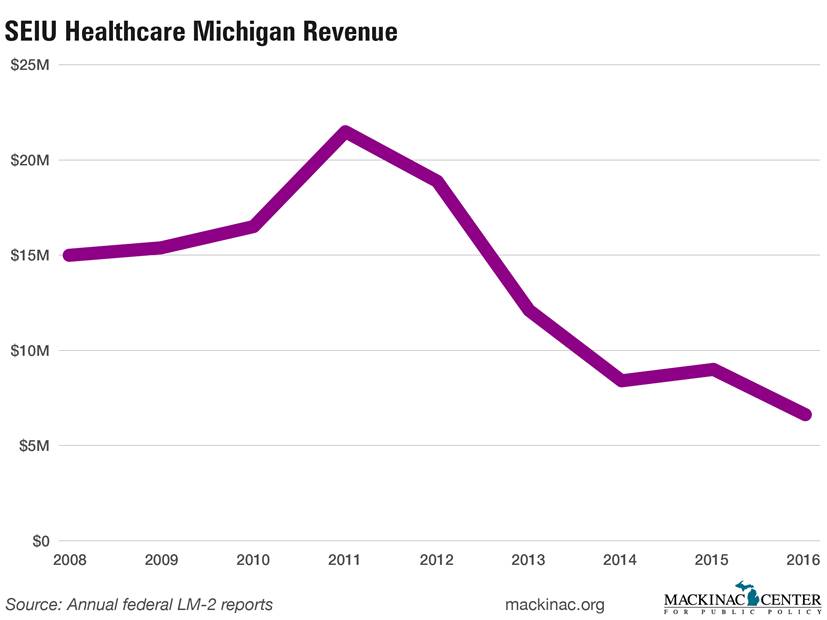 Which ultimately means less money for the union to spend on politics. Political spending bottomed out at less than 5 percent of what was spent during the high-water 2012 election and ballot proposal year. 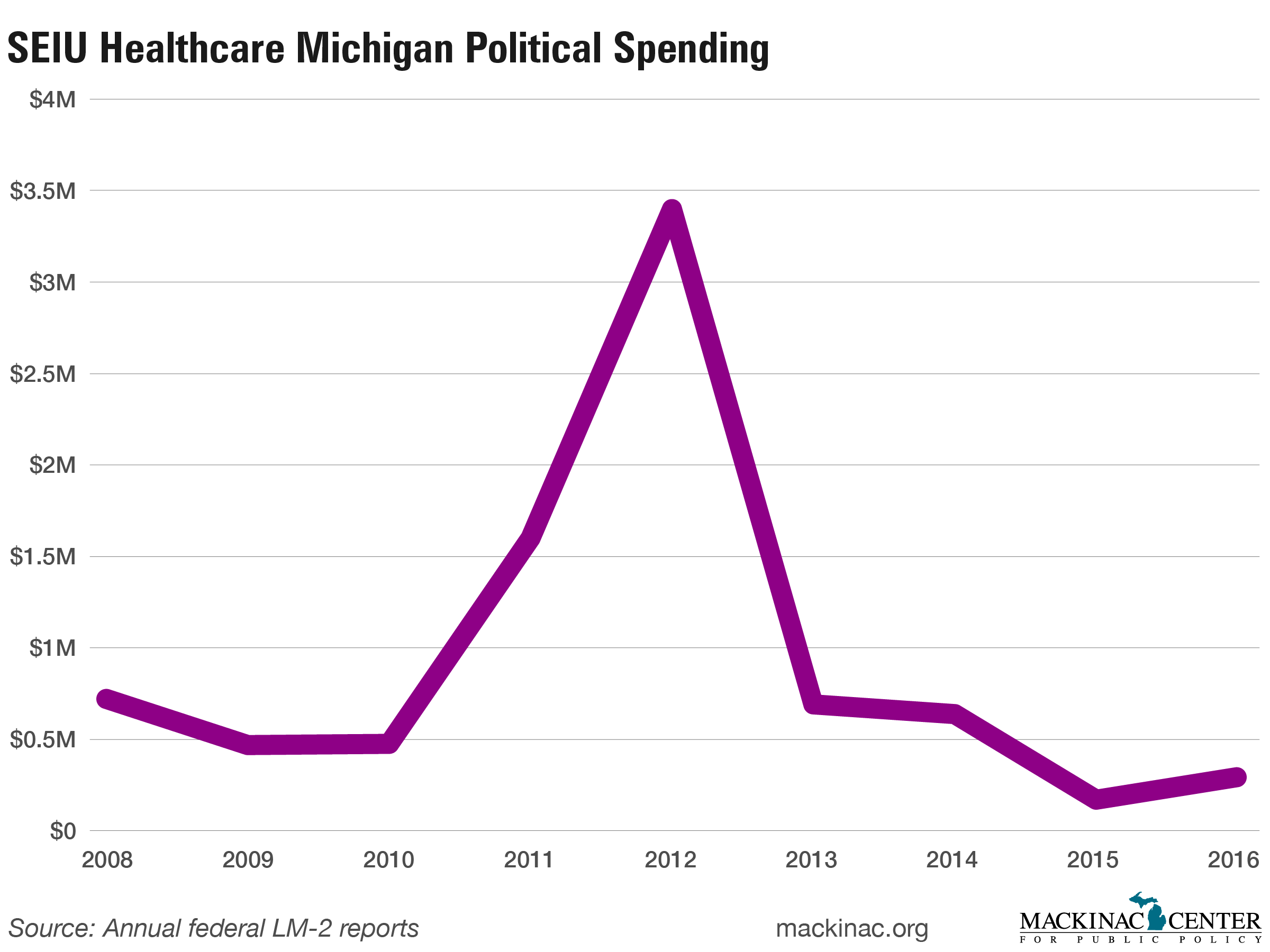 All of this goes to show that this SEIU union existed almost entirely based on its ability to coerce people to financially support it. Once Michigan workers were given the freedom to choose, the union collapsed, suggesting that it never was providing much, if any, benefit for these workers in the first place.