Most job creation happens without a press release. Job loss, too. Because of this, residents underappreciate the massive number of people who are losing jobs and finding others that occurs regularly in the economy.

This becomes a problem when it comes to state economic development strategies. Instead of policies which affect the majority of businesses, the state collects money from all taxpayers to hand out to a select few businesses. This buys state officials stories about how they’ve improved the state’s economic development, but the examples aren’t enough to deliver the broad-based economic growth that benefits everyone.

The subsidies are just not up to the scope necessary to make a dent in Michigan’s economy.

The state’s primary ongoing subsidy program right now is the Michigan Business Development Program, created in 2012. Administrators report that 31,200 jobs have been created by companies that have received MBDP deals. But over the same period, Michigan created 5.8 million jobs and lost 5.4 million jobs. If residents had to rely on these subsidies to replace the jobs lost in the natural turnover of the economy, the state would only be able to replace 0.6% of the jobs lost.

Its impact is barely noticeable during the program’s history. 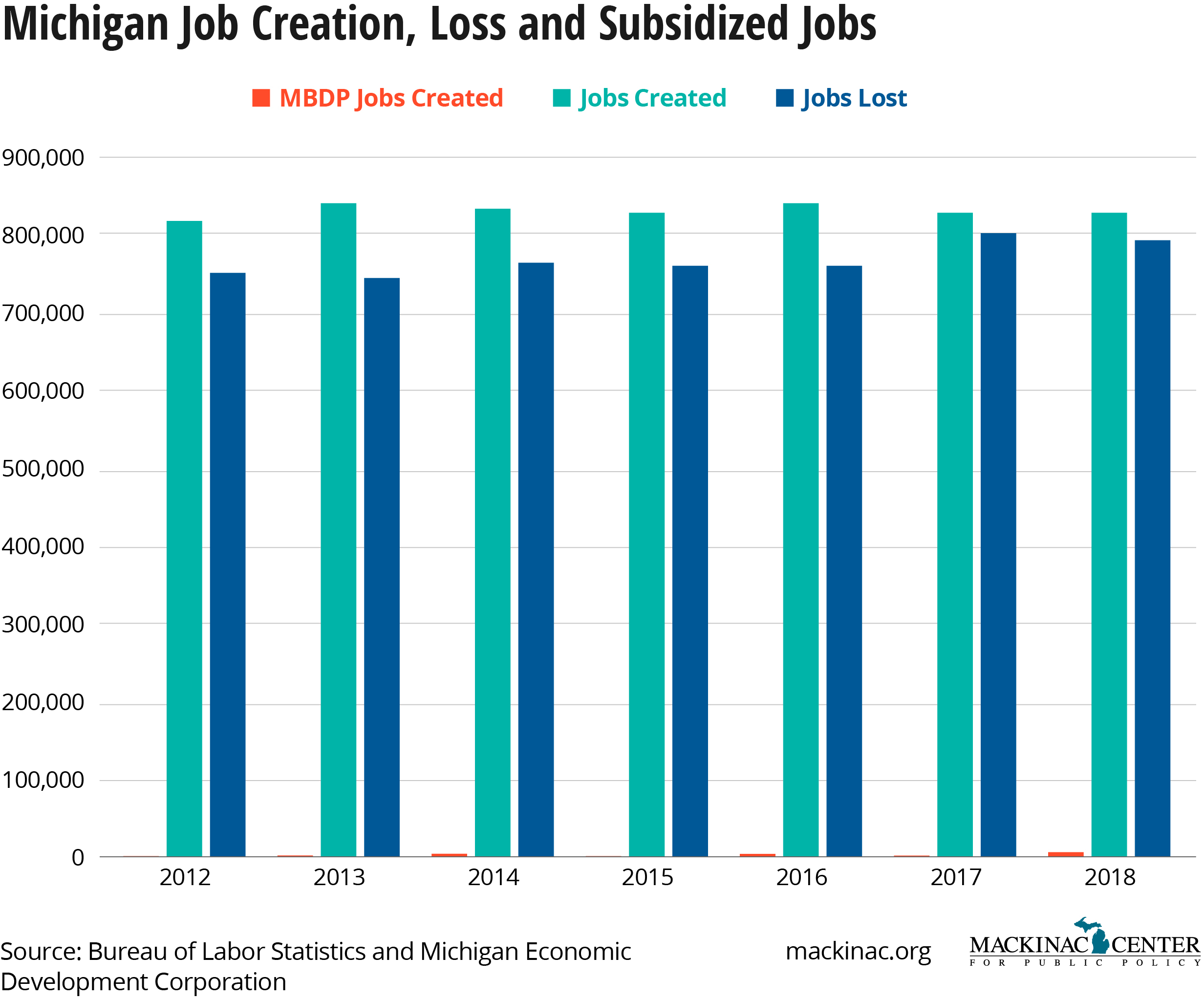 Thankfully, we have a robust private sector that creates jobs without needing direct taxpayer support.

Taxpayer subsidies for select businesses also comes with a cost that mitigates even the small positive impact that can be seen on the chart. A closer look at the economic effects of the program shows that this spending actually leads to fewer jobs overall, not more.

That’s one reason why economists’ examinations of subsidy programs like these only find small effects on the economy. Sometimes they are positive, most of the time they are negative. But they are never large effects.

Corporate handouts are an expensive distraction from policies which can improve opportunities for people in Michigan. The state should stop erecting barriers to employment like it does through its occupational licensing regime, which now affects nearly 25% of the state workforce and has a much broader economic impact than corporate subsidies. There are other tax and regulatory reforms which can improve the state economy, too.

Spending millions of taxpayer dollars shouldn't be justified by some anecdotes or the attention they draw from a ground-breaking ceremony. The state's job market doesn't depend on taxpayer dollars being distributed to a select group of businesses. Instead, lawmakers should be focusing on tax and regulatory reforms that can help improve the entire state economy and help Michigan become a more prosperous place.

Beer, Tattoo Art and Groceries: Is There Nothing the State Won’t Subsidize?

Whitmer Blames More Cases On Supreme Court Ruling, But Case Counts Up All Over