In a previous blog post about Michigan and the COVID-19 coronavirus, I argued that Michigan’s public policy front today is much stronger than it was in years past. The reader may recall that the Great Lake State was subject to an economic one-two punch during the 2000s. It lived through a decade of lost growth — basically enduring its own, single-state recession — while also being pummeled by the national Great Recession starting in December 2007.

Both downturns led to all sorts of policy mischief, including higher and more complex taxes for most and targeted tax and subsidy relief for a few. As policymakers grapple with the fallout of the coronavirus pandemic, it will help to remind them of our economic history lest they be condemned to repeat the worst of it. The good news is that today’s governor and many lawmakers may have learned not to rely on corporate welfare gimmicks to facilitate growth.

During her years in office, Gov. Jennifer Granholm and the Michigan Legislature raised both business and personal income taxes as well as a variety of fees. Both also worked to expand eligibility rules for existing business subsidies such as the Michigan Economic Growth Authority and created new programs and other fiscal favors for a lucky few.

MEGA was a corporate subsidy program which was expanded many times during the 2000s. Ultimately, the MEGA program offered up huge subsidies for corporations to retain jobs. The chart below shows how the frequency of gifts rose overall with the state’s unemployment rate. Yet the program was apparently still ineffective. Four of the five rigorous studies done on the program show it to be a net negative, and Michigan taxpayers still owe billions to corporations in old MEGA-specific promises. 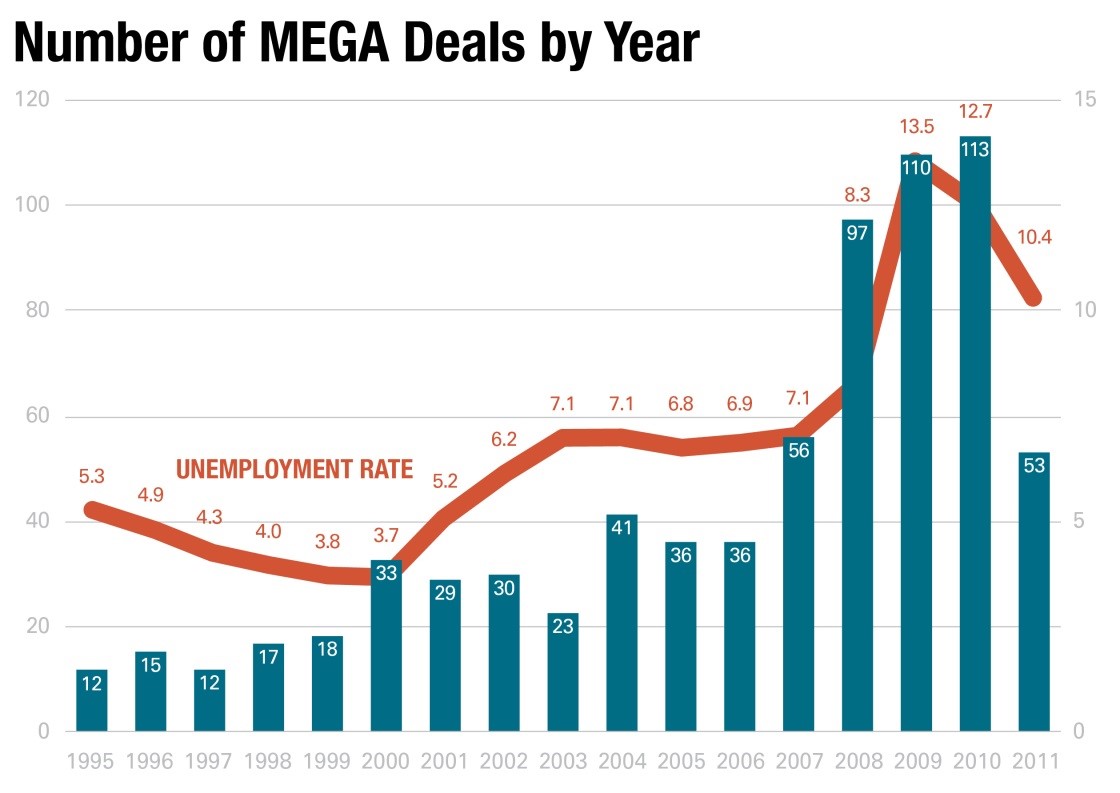 Another research paper, published in the peer reviewed journal “Growth and Change” in 2019 and titled, “Did Incentives Help Municipalities Recover from the Great Recession? Evidence from Midwestern States,” closed by calling the state’s MEGA program a “debacle.”

In the years following the Great Recession, the administration of Governor Rick Snyder reduced corporate taxes while also decreasing the emphasis on firm‐specific incentives. His administration phased out the MEGA income tax credit, though the state remains obligated to provide billions to firms in future tax credits. Perhaps Michigan businesses are maintaining jobs to keep these valuable credits, or maybe the expense of this incentive debacle made administrators more gun‐shy about allocating incentives.

This was not the only program being thrown at Michigan’s economic problems during that era. Others born of or expanded during the era and which never worked as advertised included: the 21st Century Jobs Fund, advanced battery tax credits, Michigan Film and Digital Media Incentive and the Pure Michigan tourism subsidy programs

Michigan’s film incentive was created in 2008 and cost the state more than $400 million before it was put down. The state had fewer film jobs in 2013 than 2018. The Legislature also cranked up funding for the state’s Pure Michigan program — which had been born a few years earlier — from $13.2 million in fiscal 2007 to $33.2 million in fiscal 2009 (a near-term high). Research shows the program to be ineffective. The 21st Century Jobs Fund and electric vehicle subsidy program have also flopped, but the former is still with us today.

Much of this was bad news for Michigan taxpayers, and some of it was reined in during the administration of Gov. Rick Snyder, which managed to shutter the Michigan Economic Growth Authority and the Michigan film incentive program. At the same time, they adopted more broad-based economic development policies such as tax simplification and cuts, a right-to-work law and more. Our economy recovered and grew with less corporate welfare.

The Great Lake State faces another economic upheaval in the face as it grapples with the coronavirus. Lawmakers should not return to the playbook of the past decade and reinstitute defunct development ideas or programs.