Lansing State Journal columnist Judy Putnam recently wrote that she is willing to pay more if East Lansing voters approve an income tax that appears on next Tuesday’s city ballot. Putnam pointed to the city’s property tax revenue as one reason.

“On top of that property values plummeted — along with property taxes — during the Great Recession, a downturn so devastating to Michigan that it was called our Hurricane Katrina,” Putnam wrote.

Hurricane Katrina was a natural disaster that killed more than 1,800 people and literally put a major American city underwater. Comparing it to a falloff in local property tax revenue deserves a closer look. 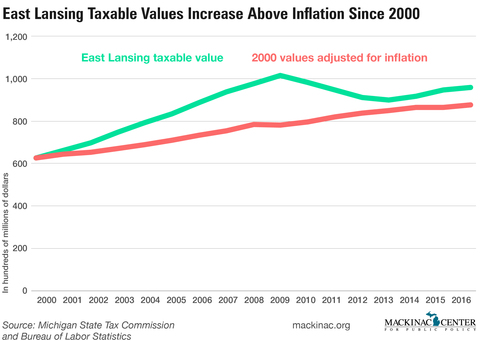 The taxable value of property in East Lansing is the basis on which city property taxes are levied. It totaled $627.4 million in 2000. If it had grown each year by the rate of inflation, East Lansing’s taxable value would have been $874.5 million by 2016. That’s an increase of $247.1 million over those 16 years if measured in 2016 dollars.

But by 2016, the taxable value of East Lansing real estate grew even more, even after inflation. It was actually $82.8 million more than in 2000, measured in 2016 dollars. Property tax collections have grown proportionately, and after inflation, were still about 10 percent higher in 2016 than in 2000. Property taxes account for about 40 percent of East Lansing city revenue.

This landscape is complicated by something else that happened during the same period, a U.S. real estate bubble from 2000 to 2007. Among other things, the bubble triggered a spike in local property values – and the local government property tax collections based on them.

During housing bubble, municipalities found ways to spend that extra money as it came in. When the bubble burst, they had to scale back their spending. The city of East Lansing was no exception.

By 2009, East Lansing was spending $46.3 million, up $7.2 million from just five years earlier. This was largely supported by a $4.0 million increase in city property tax collections, which were in turn boosted by the housing bubble. At the bubble’s peak, the taxable value of East Lansing property rose to an astounding $1.0 billion.

But when the bubble burst so did taxable values - and the property tax collections based on them. By 2013 East Lansing was levying taxes on property valued at $900.3 million, not $1.0 billion. Nevertheless, this was still $51 million higher than the city’s 2000 taxable value amount, which would have been $848.8 million if measured in 2013 dollars.

The rebound has continued, and East Lansing taxable values totaled $957.4 million in 2016. And once again, after adjusting for inflation, this comes to $28.1 million more than in 2013 (as measured in 2016 dollars).

So the “Hurricane Katrina” impact that Putnam mentioned was really just a partial reversion to what tax collections would now be had there been no housing bubble. It’s a partial reversion only, because the city still came out ahead of where it would be if property values had risen at just the rate of inflation.

In response to an email from Michigan Capitol Confidential Judy Putnam sent the following comment:

“The problem that East Lansing faces is underfunded pensions eating up a greater and greater share of revenue, which has remained fairly flat. That was the main takeaway from a budget session I attended. Regarding property values, I was referring to general trends facing cities as the reason why so many eyes are on East Lansing. Those are legacy costs, reduced revenue sharing and property values that fell during the Great Recession.”