Michigan is one of 17 states that regulate alcohol sales most heavily, imposing a three-tier distribution system on the market, among other burdens. Both regulators and the industry claim that the system exists to protect public health and safety, and provide other benefits. But the data does not support this claim — including data the state licensing agency offers in defense of its regulations.

In a recent newspaper column, Patrick Gagliardi, a former Democratic legislator who now chairs the Michigan Liquor Control Commission, lauded the regulatory scheme that his agency oversees. He wrote, “Michigan’s current liquor control system has proven, since 1933, to reduce public health and safety consequences of overconsumption and sale of alcohol to minors, achieve greater compliance with the state’s liquor laws and manage the density of private liquor outlets particularly in regard to proximity to churches and schools through licensure.”

When the commission was asked what data it uses to determine the safety benefits of regulation, it provided a response from the official state alcohol epidemiologist, Patrick Hindman:

A reliable and valid data source for high school drinking is the Youth Risk Behavior Surveillance System (YRBSS) currently managed by the Centers for Disease Control and Prevention. Overall, high school students who currently drink is down significantly in Michigan since the late 1990’s (50.5% in 1997 vs 29.6% in 2017). Binge drinking has also decreased. Drinking and driving is a little more difficult to ascertain because there is only three years of available data (2013, 2015, and 2017), but it has also decreased each survey period.

In other words, the trends cited by the state government’s leading expert on the subject, seeking to demonstrate that anti-competitive regulations reduce underage drinking, show nothing of the sort.

They instead suggest that other, larger factors are at work and that Michigan’s liquor control policies give the state no advantage over other states when it comes to safety and alcohol use. Other studies that go beyond simple survey data suggest that the stringency of alcohol market regulations do not lead to better health and safety.

An analysis comparing alcohol death rates with the level of state controls on the industry shows no correlation.

A comparison of binge drinking among individuals 18 to 20 years old found that “heavy control” states actually saw more drinking among young people than those with no state control of alcohol. (The authors note that this was not statistically significant.) 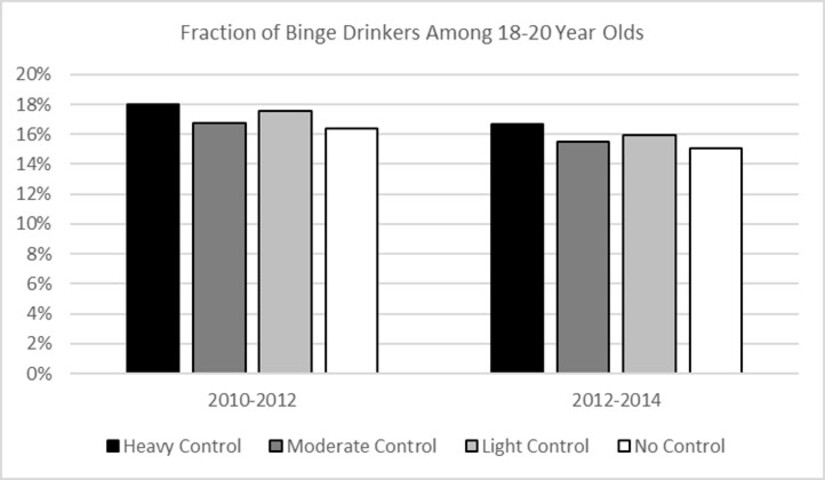 Another study, this one out of George Mason University from 2010, found “no statistically significant differences between the 18 control states and the 32 license states (and the District of Columbia) in rates of alcohol-related deaths, drunk-driving fatalities or binge drinking.” Drunk-driving fatalities and binge drinking among youths were also similar, regardless of the regulations.