The cost of employing state government workers in Michigan increased very modestly in 2019, mostly due to continued growth in benefits, according to data provided by the state to the Mackinac Center for Public Policy in response to a document request.

The total number of state government workers also rose to 47,324, an increase of 0.8% over the previous year, according to the data.

The average cost of compensation other than salary (health care insurance, retirement, retiree health care, Social Security, Medicare, etc.) was $54,845 per employee in 2019. Direct compensation (that is workers’ paychecks) that year averaged $68,114. After adjusting for inflation, direct compensation for state workers has been relatively flat for two decades, according to the Mackinac Center’s director of fiscal policy James Hohman.

After inflation, the real pay of the average state worker increased by only about 3.7% between 2000 and 2019. In contrast, the average cost of employee benefits increased almost 130% over that period. In 2000, the average state benefit package cost the equivalent of $23,885 in current dollars, with average salaries pegged at $65,673.

Hohman said the main drivers of the skyrocketing benefit costs are increases in employee health insurance, contributions to a defined benefit pension system (which was closed to new hires in 1997), and payments for retiree health care coverage.

Some of this annual benefit expense is incurred for the shrinking cohort of employees hired before 1997. Hohman said the state’s failure over many years to consistently set aside enough to pay for obligations to these to retirees has likely contributed to stagnant salaries for current workers.

Hohman said the average costs have probably declined slightly from those peak years because many older workers at the top of civil service pay scales have retired. State employment numbers over the last 20 years peaked in 2001 at 62,057 full-time equivalent employees. 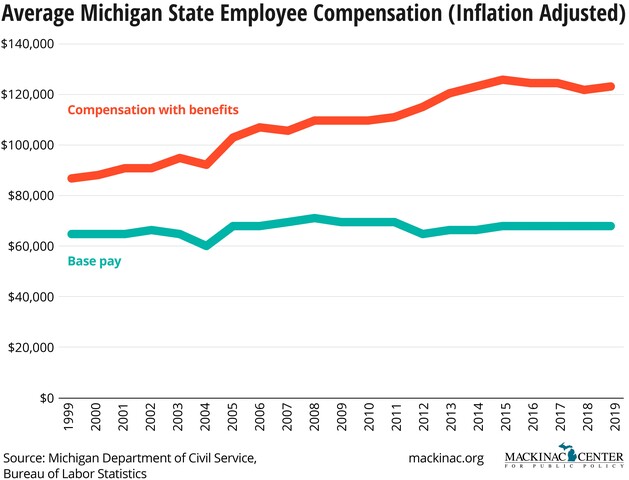