While union and media reports claim state employees have taken large compensation cuts, a look at the numbers shows that taxpayers are paying much more per employee working for them.

In fact, the state is paying hundreds of millions more for far fewer workers.

The contracts for most of the state's 47,000 workers ended at the start of 2014 and the state of Michigan is currently in negotiations with its employee unions. However, contract negotiations stalled and the Michigan Civil Service Commission is considering recommendations from an impasse panel.

In the meantime, media and union reports have been claiming that state employees have taken significant cuts during the past decade.

Several unions have protested during the talks with signs saying: "Enough is Enough" and "Ebenezer Scrooge Would Be Proud." According to an article on MLive, "state government employees argued that they've already made enough concessions over the last decade and don't want any more cuts."

A report in MIRS News said state employees have made "years of concessions."

The UAW Local 6000 website says members are "under the gun" and "have given up enough in the past."

But a look at the skyrocketing costs of employing state employees shows it is the taxpayers who are getting squeezed. 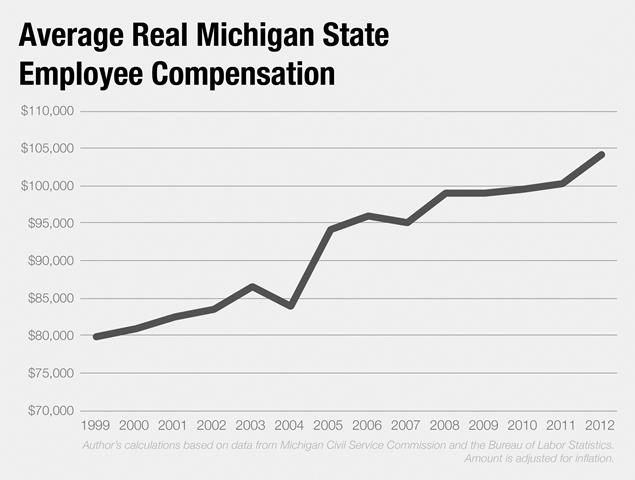 Over that time period, the average salary of a state employee stayed about the same, decreasing slightly when adjusted for inflation from $58,914 to $58,856. But the benefits of workers, mostly health care and pension costs have skyrocketed from $20,648 to $45,211. The number of workers has gone from 60,066 to 47,802, which means that state taxpayers are actually paying, in real dollars, nearly $200 million more for about 20 percent fewer workers.

From 2000-2012, according to the federal government, private-sector household income in Michigan has fallen 19.2 percent in real dollars.

Kurt Weiss, spokesperson for the state budget office, said the state is contributing an additional $160 million in 2014 for health insurance and retirement.

"These costs just continue to grow," Weiss said. "We are pleased that we have solved the perpetual $1.5 billion budget deficit that existed prior to 2011 and that we now have a state budget that is balanced for the long term. The one-time budget gimmicks of the past that once impacted state employees are now gone. Furlough days, banked leave time, and unpaid work days are no longer being discussed, but the state must remain focused on controlling the rising benefit costs associated with employee compensation."

"The growing costs of government benefit packages helps neither taxpayers nor employees," Hohman said. "Government unions need to recognize that extra requirements for pension funding mean fewer dollars that can be spent on their salaries, elsewhere in the budget, or returned to taxpayers."

The benefit of pension reform already exists in Michigan. Since new state employees were shifted from a defined benefit to a defined contribution plan in 1997 by the legislature and Gov. John Engler the state has saved an estimated $2.3 to $4.3 billion, Hohman said.

"Transitioning to a defined contribution system continues to save the state money, but it has underfunded the pensions of workers still in the system," Hohman said. "Eventually this will go away, but state policymakers are facing the consequences now."

Ed Mitchell, president of UAW Local 6000 deferred comment to UAW Vice President Cindy Estrada, who did not respond to a request for comment.