A spokesman for Gov. Gretchen Whitmer made a post on Twitter linking a Republican elected official to the Hitler signs and rhetoric that have been used by some individuals protesting her lockdown orders.

“Seems important that the Senate Majority Leader [Mike Shirkey] spoke at this event, where people also compared the governor to Adolph Hitler and the Michigan Militia provided ‘security’,” wrote Whitmer communications director Zack Pohl in his May 18 tweet.

For example, in December 2012 then-state Sen. Gretchen Whitmer addressed the crowd at a big union protest against Michigan becoming a right-to-work state. One participant at that event displayed a sign with Hitler and Nazi references, which was captured on video by the Mackinac Center for Public Policy.

Also present at that event was Maryanne Levine, president of the Chippewa Valley Education Association union, who had made this Hitler reference:

“We must close union offices, confiscate their money and put their leaders in prison. We must reduce workers’ salaries and take away their right to strike,” Levine said in 2012 to the Macomb Patch news site. “Those were the words of Adolf Hitler, May 2, 1933.”

“These are strong words, but that is exactly what they are doing and the path they seem to be taking (in Lansing),” she added.

That same day, The Oakland Press reported that a Hitler reference against GOP politicians was issued by a protestor in an unruly crowd occupying the visitor’s gallery in the state Senate chambers.

The Oakland Press reported: “Lt. Gov. Brian Calley repeatedly gaveled for order during the Senate debate as Democrats attacked the legislation to applause from protesters in the galley. At one point, a man shouted, ‘Heil Hitler! Heil Hitler! That’s what you people are.’”

This was not the only time Whitmer appeared at events where Hitler and Nazi slurs were employed against political opponents. A March 17, 2011, Lansing State Journal story reported she addressed a crowd that was protesting Snyder’s emergency management law concerning local government finance.

A video from that event shows a man with a sign depicting Snyder with a Hitler mustache, superimposed over a swastika.

References and images linking political opponents and their preferred policies to Nazis and Hitler are not appropriate, but they are used by grass roots activists on both the right and left in U.S. politics. 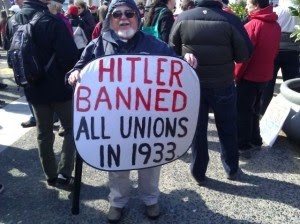 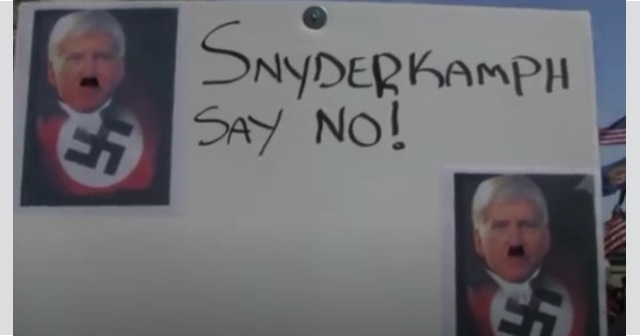