Officials at the University of Michigan are working to prevent the release of records showing lockdown-related data and recommendations it offered to Gov. Gretchen Whitmer in March 2020. University officials suggest that releasing this information could result in security threats to professors. The university also insinuates that its refusal is somehow linked to a highly publicized 2020 plot to kidnap the governor.

“Events in Michigan around the time of the University’s response to Plaintiff’s FOIA request demonstrate that tensions around COVID-19 restrictions had reached a fever-pitch,” the university said in refusing to release the records in response to a Freedom Of Information Act request submitted by the Mackinac Center for Public Policy. The university's response continued, “For example, on October 6, 2020, six individuals were charged with conspiring to kidnap Governor Whitmer. While the University is not alleging that Plaintiff intends to use the redacted information to commit a similar crime, that incident demonstrates that security threats against people involved in discussing COVID-19 restrictions are real.”

The Mackinac Center sought to learn what advice university personnel gave Whitmer about the state’s response to COVID-19. During the 2020 stay-at-home order in effect from March 23 to June 1, Whitmer frequently asserted that her actions were based on the best science. But she refused to disclose meaningful specifics.

The Mackinac Center filed a request with the university under the state’s Freedom of Information Act, asking for certain emails. The material turned over by the university was heavily redacted and was not a meaningful response.

The Mackinac Center objected to the redactions. It said the rationale for the lockdown provisions is a matter great public interest, and that it did not request any personal information, including email addresses, of U-M employees. The Mackinac Center filed a lawsuit in May 2020 over the dispute.

Before COVID-19 arrived, Michigan’s state government already had plans for how to respond to an epidemic or pandemic. They did not call for a stay-at-home order. Guidelines published by the Centers for Disease Control and Prevention and the World Health Organization did not recommend lockdowns, either.

Some of Whitmer’s more controversial decisions early on had an arbitrary or ad hoc appearance. One order, for example, she told big box stores to close aisles holding paint, flooring, furniture and gardening supplies, but not other areas. The governor also banned using motorboats but not rowboats, canoes, or kayaks; playing golf was forbidden, but not walking on a golf course while holding a club. When golf was later allowed, golfers were banned from using powered carts.

Here is a slideshow of some examples of what the University of Michigan is redacting. 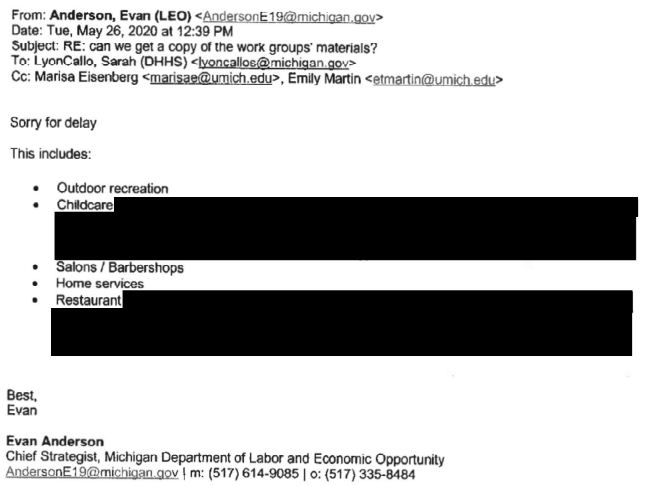 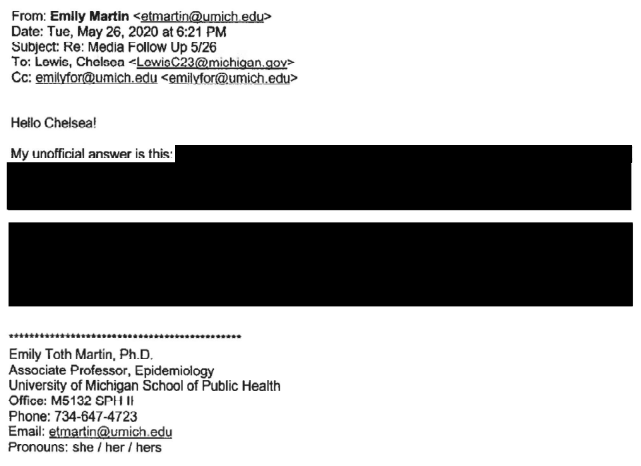 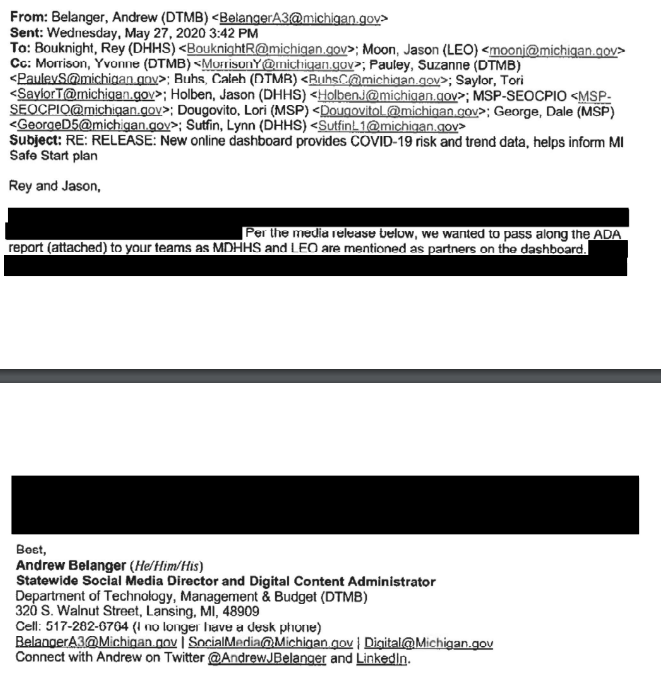 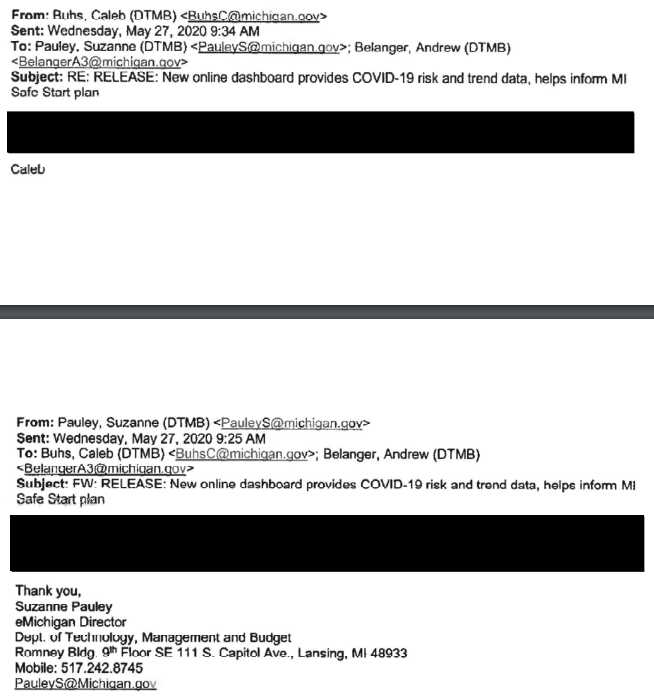 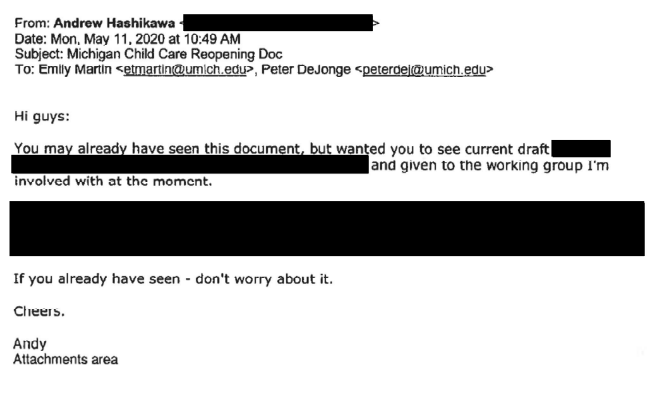 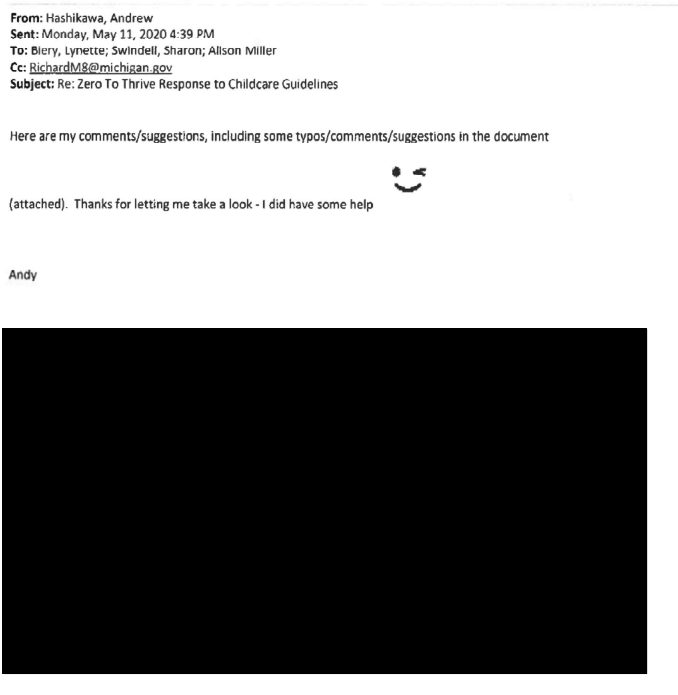 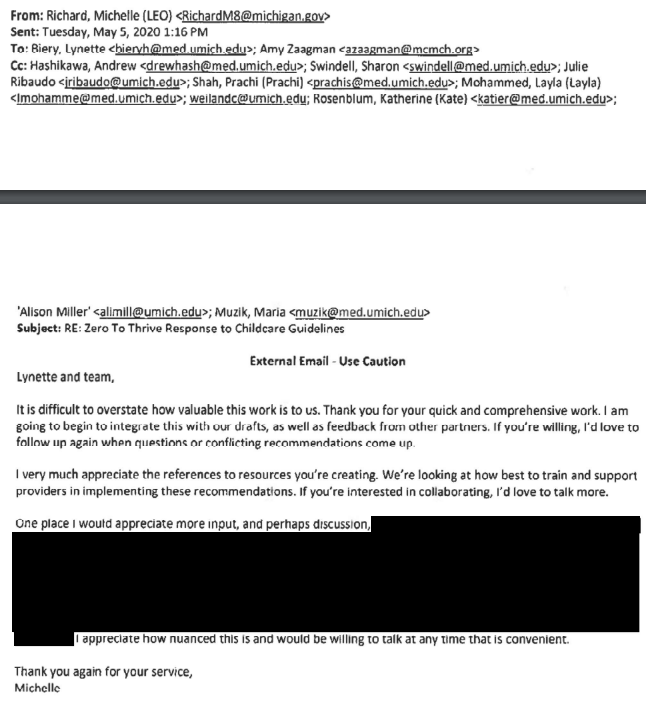