On Dec. 11, 2008, during a post-election "lame duck" session, the Michigan House of Representatives hastily and overwhelmingly approved House Bill 4141, legislation that would provide an end-run around significant taxing and spending limitations set in place by Proposal A, the 1994 property tax and school funding reform that was ratified by 69 percent of Michigan voters.

Taxpayers were relieved in 1994 when Proposal A ended the constant stream of local millage elections. The result was lower property taxes and, at the same time, significant funding increases for school operations. But in 14 years of chafing under these limitations, public school officials never stopped looking for ways around it.

The Michigan House's approval of HB 4141, which was sponsored by Rep. Mark Meadows, D-East Lansing, was the latest of several attempts. The legislation would let school districts levy "sinking fund" taxes for the same purposes as regular school bonds. In her 2002 election campaign, Gov. Jennifer Granholm endorsed the idea, so if this proposal is passed by the senate it's almost certain she would sign it.

The House passed an identical bill during another late-night session on Dec. 13, 2001, but most members had been told it was merely a "technical" change in the law. The bill is anything but that. When the truth became known, the Senate never considered the bill, though versions of it have been introduced in every legislative session since.

This most recent late-night approval of virtually the identical concept came almost seven years to the date later. Once again, the Senate came to the taxpayers' rescue when that chamber declined to consider HB 4141, letting it die when the 2007-2008 session of the Legislature came to a close.

The legislation did not receive a committee hearing and was instead the subject of a "discharge" motion, a parliamentary maneuver that allows a bill to be removed from committee deliberations and sent directly to the floor of the House for a vote. Sometimes, this tactic is used when a rapid and unexpected vote is desired so as to give public opponents less time to contact and persuade lawmakers to vote "no."

The Michigan Chamber of Commerce, one of the state's largest business representatives with 7,100 members, is one such opponent and strongly believes that this evasive strategy was being used against them. Blasting the vote as a an "unconscionable act" conducted "in the dark of night" without "public debate," the Chamber conservatively estimates that if it became law this expanded use of sinking funds would represent a $3.2 billion property tax hike.

"This sneak attack on taxpayers was utterly irresponsible," stated Chamber President Rich Studley. "With home foreclosures in Michigan among the highest in the nation and homeowners paying higher taxes on lower property assessments, this legislation is ludicrous."

How does HB 4141 accomplish its end run around Proposal A? Traditionally, sinking funds were a way to set aside money to repay principal on a debt and for future capital projects — like buying real estate or constructing and repairing buildings. Unlike school bonds, which can be used for everything from furniture to school buses, the legal uses of sinking fund taxes are limited. Nevertheless, school districts are relying on them more and more — as of 2005 almost a quarter of the state's 551 districts had sinking funds. If the allowable uses for these funds are expanded, that number can be expected to grow even larger.

Because the bill doesn't explicitly repeal any of Proposal A's operating millage caps, it doesn't alert the public to its likely outcome. Technically, it just lets sinking funds be used for the same purposes as school bonds. Schools are limited in how many mills they can levy for regular bonds and still qualify for favorable interest rates — but if sinking funds could be used for the same purposes, it would create a whole new 5-mill property tax opportunity.

Sinking funds currently allow school officials to maintain a fund of property-tax-generated dollars available for the permissible uses, the scope of which would greatly expand under this legislation. Schools could dip into the pot whenever they like, a luxury not afforded by regular bonds.

If HB 4141 becomes law, a school board could offer higher salaries or benefits from its annual state foundation grant, since other expenses funded by these grants in the past might be covered by new sinking fund tax dollars — a potential shell game. School board members friendly to employee unions could seek ways to substitute sinking fund proceeds for these expenses, thereby conserving state money to boost payrolls without accompanying productivity increases.

This effort to raise taxes comes at a time when hundreds of millions of dollars in potential savings are already available. Following Ohio's example by exempting schools from "prevailing wage" rules would save at least $150 million every year. And millions more could be saved, as many districts have shown, through competitive contracting of support services such as food, custodial and transportation.

While the Michigan Chamber's "conservative" estimate is a $3.2 billion property tax hike, their high-end estimate is $7.6 billion. This bill is clearly a taxpayer unfriendly "tweaking" of Proposal A; it would diminish the system that has lowered Michigan property taxes, brought more money to our schools and injected a measure of competition into the school system.

Needing 56 votes to pass, the bill was approved with strong bi-partisan support when 20 House Republicans joined 51 Democrats in voting for the measure. The bill was opposed by 28 lawmakers, all Republicans, while 11 legislators did not vote. As noted above, the Michigan Senate declined to consider the proposal, which died when the 2007-08 term of the Michigan Legislature came to a close.

The Michiganvotes.org vote tally for 4141 is below. See Who Are Your Lawmakers? for contact information on your legislators. 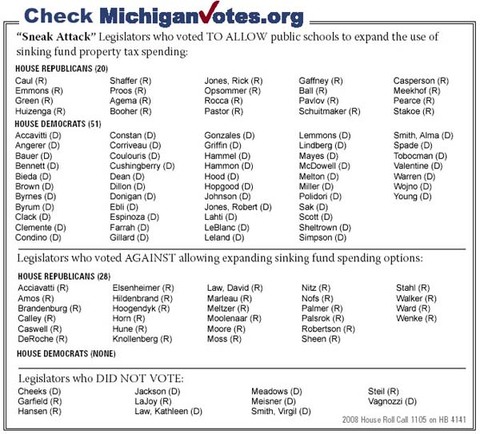 Jack McHugh is the senior legislative analyst for the Mackinac Center for Public Policy. He may be reached at mchugh@mackinac.org. This is an updated version of his May 23, 2006, commentary on a similar proposal.