Politicians and self-proclaimed environmentalist groups tell us that the salvation of our moribund economy is green jobs. We are being asked to believe in the bold new economy that will replace current forms of energy such as coal-fired power plants and gasoline-powered cars with alternative energy such as wind-powered utilities and cars that run on bio-fuels or electricity. But, are these green jobs our economic salvation or just another ill-advised attempt by politicians to steer the economy in a new direction?

Economic prosperity requires that we have access to both reliable and affordable energy to heat our homes and power our factories and vehicles. A steep run up in energy costs coincided with an economic recession in the 1970s and is once again a contributing factor to our current economic problems. Alternative energy mandates supposedly will serve as an economic stimulus by creating new jobs such as building wind mills and solar panels.

Claims similar to those being made by Phil Angelides of the Apollo Alliance that the development of clean energy will provide concomitant "growth in jobs, technology, equipment, suppliers and productivity if the United States actually treated the development of clean energy as a national economic priority" conveniently ignore economic realities. Mandating more expensive forms of alternative energy takes money out of the pocket of consumers and drives up business costs, resulting in the loss of jobs. An additional test for the viability of green job economic benefit claims is whether these projects require government subsides or not. If the answer is yes, the end economic results are more likely negative rather than positive.

Another significant problem with alternative energy mandates is that they often result in unintended consequences. Ethanol mandates are a prime example. The promise of ethanol to power our automobiles was simply too good for politicians to resist. After all, who could oppose growing our own fuel rather than relying on oil imports from hostile nations with the added benefits of assisting the nation's farmers and reducing the CO2 emissions that many environmental activists and scientists believe contribute to global warming?

But, alas, ethanol did not deliver the promised benefits. In fact, the negatives of ethanol far outweigh its positives. "A Note on Rising Food Prices," a report released in July 2008 prepared for the World Bank, concludes "the most important factor [for world food price increases] was the large increase in bio-fuels production in the U.S. and the EU."

The energy bill passed by Congress last year requires a 400 percent increase in the use of renewable fuel in gasoline from the current 9.0 billion gallons per year to 36.0 billion gallons per year in 2022. In a Congressional Research Service report ("Biofuels Provisions in the 2007 Energy Bill and the 2008 Farm Bill: A Side-by-Side Comparison"), updated June 27, 2008, the authors conclude: "Although this is not an explicit ethanol mandate, it is expected that much of this requirement will be met using corn-based ethanol." This expanded renewable fuel mandate caused increases in food prices.

Many environmentalists who formerly pushed for ethanol subsidies and mandates now have dropped their support for corn-based ethanol. Two studies published by the journal "Science" in February of 2008 posit that ethanol production actually increases the release of greenhouse gases. According to researchers at Princeton University, it would take 167 years of producing ethanol to offset the release of carbon dioxide from converting lands to agricultural production. Even with federal and state government subsidies, several ethanol plants across the country have gone bankrupt and plans to build new plants are being shelved.

Solar and wind are now the darlings of advocates for the "new green economy." Producing solar panels and wind turbines are supposed to replace lost manufacturing jobs from industries such as steel and automobiles (never mind that solar energy has been shown to have only limited applicability and that the best wind farm in the world only operates 30 percent of the time). This economic transformation, of course, can be achieved only with government subsidies and mandates. Taxpayers are being asked to foot the bill and the end result will be increased utility bills. Increasing the cost of energy for consumers and businesses can only result in one outcome — fewer jobs.

First we had the dotcom bubble and then the housing bubble. Is the green energy bubble next? American taxpayers would be better served by being told the truth by politicians, rather than the economic nonsense that surrounds the hype regarding the green economy.

(Note: Michigan lawmakers approved two bills relating to the subject matter of this article during December of 2008, as part of the "lame duck" session of the 2007-2008 Michigan Legislature. Brief descriptions of these bills and the Michiganvotes.org roll calls are noted below.) 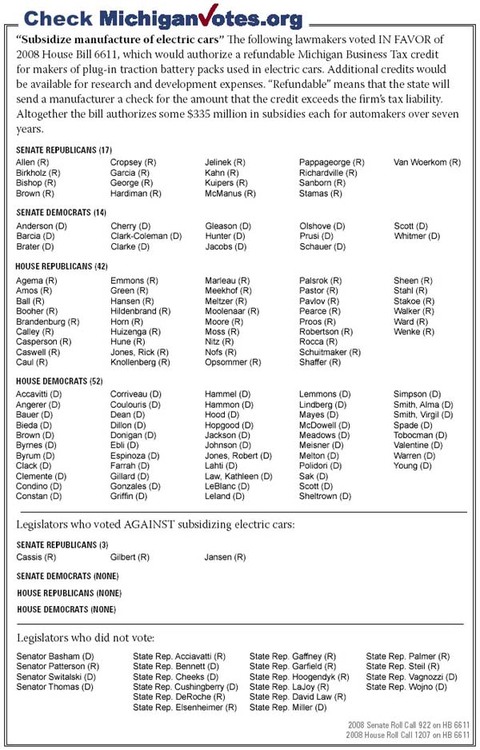 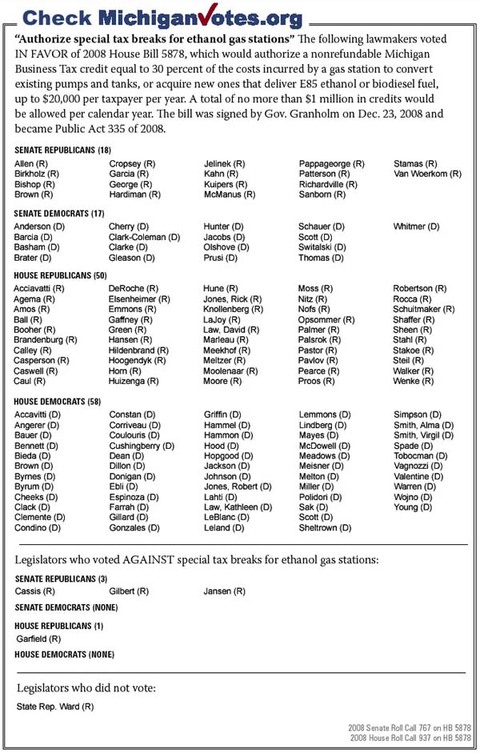 Russ Harding is director of the Property Rights Network at the Mackinac Center for Public Policy. He may be reached at harding@mackinac.org.