On Feb.12, 2009, the Michigan Senate resoundingly defeated 2009 Senate Resolution 13, a proposal urging Gov. Jennifer Granholm "to work with the Civil Service Commission to require that state employees either work on President's Day or take the day off as an unpaid holiday to reflect the state's dire financial challenges."

SR 13's sponsor, state Sen. Tom George, R-Kalamazoo, reminded his colleagues before the vote that President's Day is a real workday for state employees in other states and much of the private sector everywhere. Only four other Republicans, including Senate Majority Leader Mike Bishop, R-Rochester, voted in favor of the proposal, while 14 Republicans and 16 Democrats voted against it. 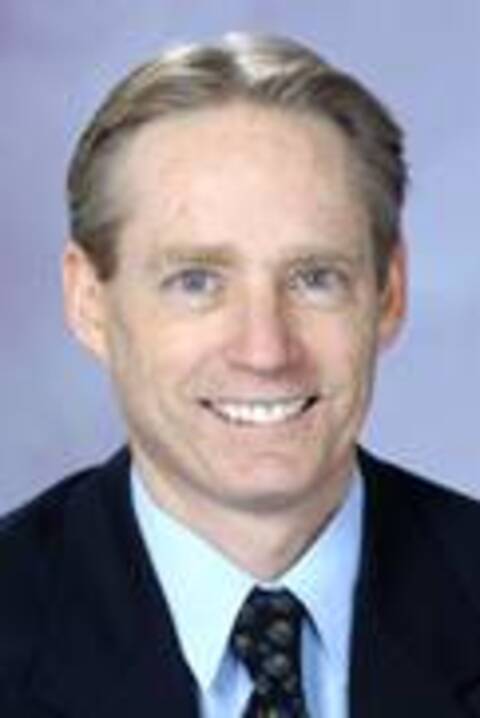 In order to fix Michigan, state employees
cannot be paid for being idle while the rest of
Michigan is yearning to go to work.
– State Sen. Tom George

On the same day, the governor introduced her fiscal 2010 budget, which included proposals to cut $670 million from a variety of state programs, including layoffs for approximately 1,500 state employees, the early release of roughly 4,000 state prisoners, a $100 million cut to state universities, a $164 million cut to K-12 spending and more.

This alarmed some of the Democratic governor's most powerful allies in the Legislature. State Rep. George Cushingberry, D-Detroit, accused the governor of "taking advantage of state workers." Cushingberry is the chair of the House of Representatives' Committee on Appropriations.

According to a 2007 analysis of state worker benefits written by the Mackinac Center's Michael D. LaFaive, each member of Michigan's classified workforce receives 12 holidays every year, and 13 during even-numbered years because Election Day is also credited as a holiday.

LaFaive also noted that employees of the state House of Representatives receive 12 official holidays and also one paid leave day for each ten days of service — a total of 26 leave days per year. The combined total is nearly 2 months of paid leave per year for each of these legislative employees.

The pay and benefits for several Michigan government jobs, such as corrections officers and receptionists, were also examined, revealing that Michigan's state workers are well compensated when compared to comparable workers in the private sector and in other state governments.

The Michiganvotes.org roll call vote for SR 13 is provided below. The text of the resolution along with Sen. George's remarks in support of it follows.

A resolution to urge the Governor to work with the Civil Service Commission to require that state employees either work on President's Day or take the day off as an unpaid holiday to reflect the state's dire financial challenges.

Whereas, Michigan's economic conditions are well documented. Our longstanding status as the state with some of the highest unemployment rates from month to month and the several years we have lagged behind the rest of the country in a host of key economic measures make it clear that significant changes must be made; and Whereas, As thousands of Michigan families cope with joblessness, the fear of unemployment, and grave uncertainty in their finances, it is important for the public sector to ake the same kinds of sacrifices many in the private sector have been making. It is an incongruous situation that 50,000 state employees enjoy paid holidays for dates when most private workers report for work the same as always; and

Whereas, As Michigan searches for new ways to revive our economy and improve the state's outlook, it is most appropriate to revisit our current practices. Assumptions and policies that may have worked well in the past, when Michigan was in a far stronger situation economically, are not so applicable today. Setting a more realistic tone by reevaluating the benefits enjoyed by state employees can send a significant message and help Michigan in both practical and symbolic ways; now, therefore, be it

Resolved by the Senate, That we urge the Governor to work with the Civil Service Commission to require that state employees either work on President's Day or take the day off as an unpaid holiday to reflect the state's dire financial challenges; and be it further

Resolved, That copies of this resolution be transmitted to the Office of the Governor.

Monday morning, the sun will come up and alarm clocks will sound and Michiganders who are lucky enough to have jobs will rub the sleep from their eyes and will celebrate President's Day by heading off to work. Throughout Michigan, auto repair shops will open; so will restaurants, retail shops, dry cleaners, and dental offices. In my district, the public schools are open; teachers and students will report as usual. The Kalamazoo Public Library will be open; so will both Kalamazoo and Portage city halls. Most county offices will be open. Classes will be held at Western Michigan University, Michigan State University, and the University of Michigan. Across the border in Indiana, all state offices are open for business.

When we lose people and jobs to the state of Indiana, we are sometimes told that it is because of our tax structure-that people and businesses pay more in Michigan. Now if that is so, shouldn't it follow that they should be receiving better services from state government? One might think that perhaps those higher taxes would result in faster services, a quicker turnaround time, or a better response from government. But sadly, on Monday that will not be the case. There will be no state services on Monday, as state government will be on vacation.

I am heartened to see that Governor Granholm and her administration will be meeting with state employee unions in the coming weeks to discuss ways to help fix Michigan through concessions. Colleagues, concessions are nothing new to workers in Michigan, as the Big Three continue to negotiate contracts with their employees to find ways to keep the companies viable and the employees employed.

My friends, if we are ever to truly turn Michigan around, we must stop paying government more and getting less in return. In order to fix Michigan, state employees cannot be paid for being idle while the rest of Michigan is yearning to go to work. 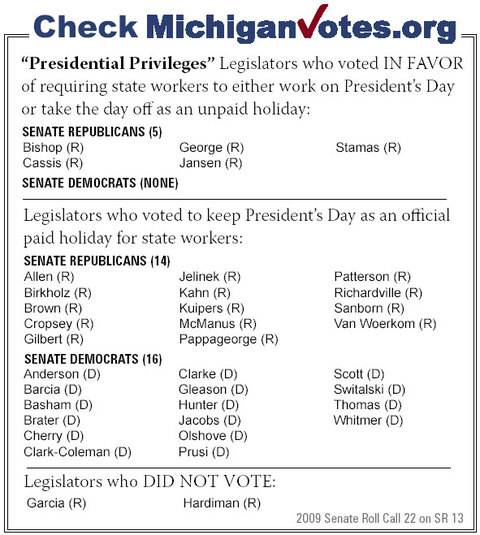