Public-sector compensation has been a matter of intense public debate in Michigan. On one side are public-sector employees fighting to keep union privileges, and on the other are those trying to lower the cost of government. But as a simple matter of fiscal prudence, any spending item that increases at a faster rate than the means to pay for it needs to be explored. For state and local governments, there’s no bigger area that needs exploration than government employment benefits.

Average benefits per employee at state and local governments (including public schools) increased 34 percent from 2000 to 2010, adjusted for inflation, according to the Bureau of Economic Analysis. 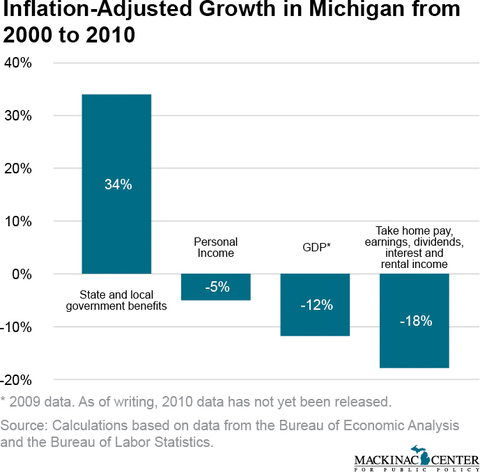 Without a long look from policymakers, the state is resigning itself to unsustainable increases.

Without a conscious policy direction, the value of state and local government employment benefits grew substantially in the past decade without the means to pay for it. It’s a problem that deserves review, regardless of public employee protests.