Michigan’s economy performed poorly during the 2000s, only to be hit hard by the recession near the end of the decade. While growth in the current decade has been tepid in Southeast Michigan, the Grand Rapids area is a boomtown. The region fully recovered from the recession and has grown beyond its peak in 2000.

There are more people employed in the area — composed of Kent, Barry, Montcalm and Ottawa counties — and those workers are both producing and earning more. There are 542,600 jobs in the area, 19.8 percent more than its 2009 recessionary trough and 4 percent more than its 2000 peak. Per capita personal incomes increased 13.5 percent in the recovery and are 5.3 percent above 2000 levels, adjusted for inflation. The value of goods and services produced the area rose 21.5 percent from the recessionary trough and 16.2 percent from 2001 (metropolitan GDP information doesn’t go back to 2000). 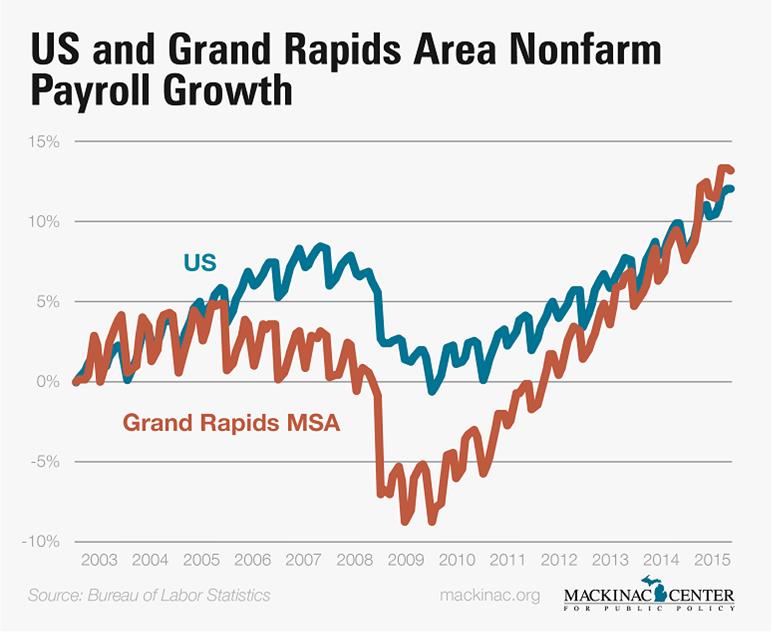 The Grand Rapids area unemployment rate is currently 2.8 percent, even as the size of labor force increased. There are roughly 67,000 more people either with a job or looking for a job compared to in 2009, a 13.6 percent gain in labor force participation.

The area's economic improvement goes across sectors and does not appear to be the result of just one industry taking off. The rest of the state is going through the same trends, but just not as strong.

Health industries kept growing and have been immune to recessionary pressures. There are now 60.8 percent more jobs in this sector in the Grand Rapids area than in 2000. The rest of the state added 26.5 percent health industry jobs.

The professional and business sectors in Grand Rapids are up 22 percent over their 2000 peaks, but just 1 percent higher in the rest of the state.

Manufacturing jobs recovered but there are still fewer factory jobs than there were in 2000. The area’s iconic furniture manufacturing industry reports some growth, but employment in this area remains below its 2009 levels. Auto and auto parts manufacturing are also recovering but not back to 2000 levels.

Michigan improved its business climate over the past five years with business tax and labor reforms and there are economic gains across the state. But by themselves, improvements to state policy do not explain why one region is growing faster than others.

Jody Vanderwel of the Grand Angels — an investor group in the area — suggests that a culture of entrepreneurship coupled with a collaborative community of investors has been a driver. Unfortunately, that is a difficult thing to measure and test to validate as an explanation.

Regardless of the exact causes, it is encouraging to see one region booming, and a hopeful sign that others in Michigan may follow.