Michigan will collect more taxes next year, but not as much as predicted a few months ago, leaving members of the Legislature looking at a sizable gap between what they want to spend and the money available to pay for it. The most constructive and efficient way to balance the budget is to eliminate the state’s corporate welfare programs and supporting bureaucracy.

The budget the Legislature enacted for fiscal year 2016 included almost $178 million in six major items over which the Michigan Economic Development Corporation controls. Cutting this would not only help balance the budget, but could improve Michigan’s economy. Lawmakers may also be able to redirect an additional $39 million from Indian gaming monies that currently flow directly to the state’s corporate-welfare bureaucracy. 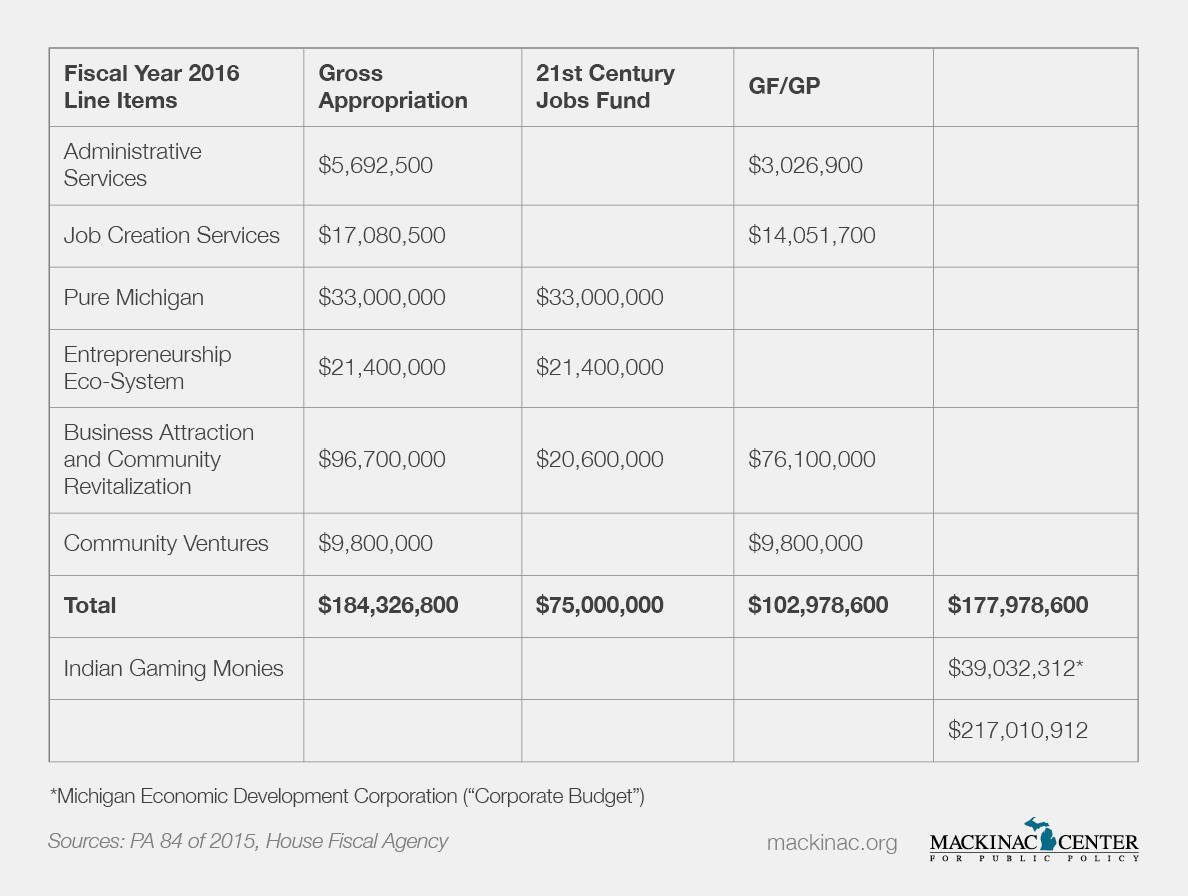 The MEDC takes money from many people and businesses and gives it to a few. The logic that government can create more jobs than would otherwise exist is wrong according to both experience and empirical evidence.

One of the reasons cited publicly for the budget shortfall is the need to pay out on an old, targeted business subsidy program called “Michigan Economic Growth Authority.” Five scholarly analyses of MEGA have been performed since 2005, and three of them found the program had, at best, no impact on job creation and at worst, a negative one. A fourth found a positive but tiny impact.

The fifth study, published in 2014, reports, “There are no relationships between the use of MEGA and economic health.” The author, Michigan State University scholar Laura Reese, looked at more state programs than MEGA and concluded, “The wisest course of action for most cities would be to eschew particularized development incentives, especially those that require tax incentives.”

The state’s auditor general found that Michigan’s 21st Century Jobs Fund program could only show that roughly 19 percent of the jobs promised actually materialized. That doesn’t take into account the costs of running the program.

The Michigan film incentive program paid out more than $500 million in taxpayer money before it was canceled in 2015. Even one of the MEDC’s own paid consultants found that the program cost the state treasury more money than it generated.

The Mackinac Center recently discovered the same to be true of the state’s tourism promotion efforts, such as the Pure Michigan campaign. The Center looked at efforts of 48 states to promote tourism over nearly 40 years and found a negative result. For every $1 million increase spending, hotels and motels saw an additional $20,000 in extra economic activity. Eliminating this program alone would save the state $34 million in fiscal 2017 alone.

There is more evidence that programs like these don’t work, in Michigan and nationally. Economists Peter Fisher and Alan Peters conducted a literature review, looking at the work other scholars had done. In their paper, “The Failures of Economic Development Incentives,” they concluded the tens of billions dedicated nationwide each year to incentive programs are probably ineffective.

Worse, the MEDC may actually harm economic growth. A study published in the Cato Journal argues that states that encourage “rent seeking” may stunt their real rate of economic growth considerably. In rent seeking, private parties, like businesses, go to the government in search of favors, like subsidies. The MEDC hands out such favors.

The state needs to scale back its plans for spending. It should start with eliminating corporate welfare spending.

Michigan Company, Lauded As A Face Of Green Energy in 2012, Now Defunct