When the first straws in the wind appeared last December indicating a major push for a tax hike in 2007, Mackinac Center Senior Legislative Analyst Jack McHugh began a chronicle of events he called "Anatomy of a Tax Hike Campaign." When McHugh’s prediction came to fruition with the approval of a nearly $1.4 billion tax hike on the morning of Oct. 1, 2007, McHugh detailed the event with an entry that began as follows:

"In the final hours before a shutdown of state government, to avoid cutting spending in the fiscal 2007-2008 Michigan budget, the Legislature votes to increase the income tax from 3.9 percent to 4.35 percent and expands the 6 percent sales tax on a wide variety of services. The income tax will take an additional $765 million out of the private economy, and the service tax $751 million in its first full year. This combined $1.5 billion tax hike [later revised to $1.358 billion] is accompanied by a package of reforms that correct some outright fiscal malpractice, but are not transformational for the state" (see "Legislators Link Common-Sense Reforms ... ").

As McHugh went on to add, there were "no substantive spending cuts associated with the deal." Yet just over a week earlier, such options were on the table. On Sept. 23, 2007, the Michigan Senate narrowly approved Senate Bill 511 and Senate Bill 237, two proposals that would have closed the gap between desired spending and projected revenue by $900 million with the implementation of both actual spending reductions and reductions in the rate of spending increase to nearly every major area of state spending. Some examples:

Senate Bill 237, the bill to cancel the governor’s proposed hike in school aid spending, was approved by the Michigan Senate on a strictly partisan vote — all 21 Republicans voting for the cuts, all 17 Democrats voting against. Senate Bill 511, the companion proposal to trim spending by $574 million in other state departments, was also narrowly approved — 20 of the Senate Republicans voted for the cuts, with one Republican joining all 17 Democrats voting against.

The combined package of $900 million in spending restraint did not become part of the budget agreement. The Michigan House of Representatives declined to bring either Senate bill up for a final vote.

Just days before the agreement to balance the budget with tax increases rather than spending reductions, Michael D. LaFaive, director of the Mackinac Center’s Morey Fiscal Policy Initiative, announced the results of a public opinion survey showing that 71 percent of Michigan’s likely voters preferred a budget agreement that relied primarily on spending reductions. Summing up the difference between what taxpayers wanted and what they got, McHugh wrote the following: "[T]he political class surrendered to the special interests who benefit from the status quo in state government and let slip an opportunity to embrace transformational change. Given the economic trend lines, it’s likely that a real crisis will strike the state within the next decade, where unemployment rates skyrocket well into double-digit territory, the ‘last person out turn off the lights’ signs acquire real meaning, and the option to reach deeper into taxpayer pockets is not available. It’s not too late to adopt budget, regulatory, labor law and tax policies that would avert that, but time is running out." On Oct. 18, 2007, McHugh released a Mackinac Center Policy Brief listing 55 specific spending cuts that would immediately trim $1.358 billion from the just-enacted budget agreement and allow for the repeal of the tax hikes. These cuts include some that appeared in the two Senate bills. This report is available at www.mackinac.org/9060.

McHugh’s "Anatomy of a Tax Hike" diary of how the budget agreement and tax increases came to pass may be viewed in its entirety at www.mackinac.org/8532. The Mackinac Center’s public opinion survey of Michigan voters regarding their preferences for taxes and budget cuts is available at www.mackinac.org/9015.

See an "Alternative View" of the tax hikes from the Michigan League for Human Services.

The MichiganVotes.org tally for Senate Bill 511 — legislation that would have restrained spending in various departments by $574 million, the income tax hike, House Bill 5194, and the new 6 percent sales tax on services, House Bill 5198 — appear below. The vote tally for Senate Bill 237, which would have implemented spending restraint on the school aid fund, is not listed for space reasons and because unlike these other votes, it was a strictly partisan decision, with every Republican endorsing the cut and every Democrat opposing it. The formal vote tally is available at www.michiganvotes.org/RollCall.aspx?ID=236643. 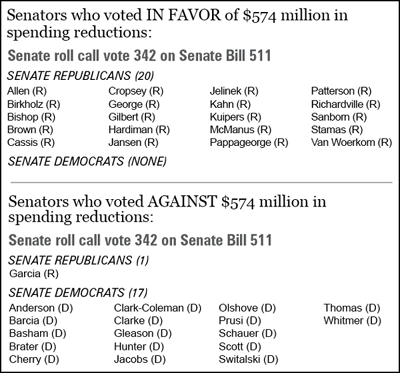 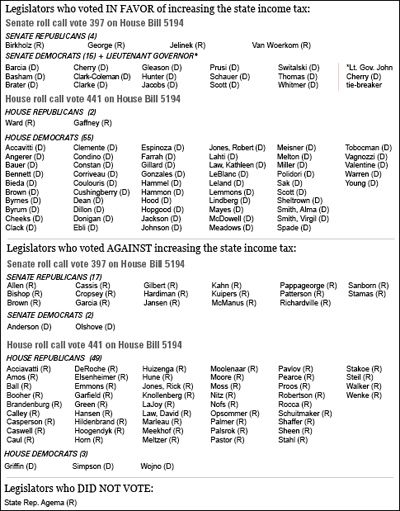