A collection of long-overdue policy reforms regarding public-sector employees was enacted as a silver lining to the tax hikes enacted on the morning of Oct. 1, 2007 (see "Blown Away!"). Mackinac Center Senior Legislative Analyst Jack McHugh noted that these common-sense reforms helpfully "correct some outright fiscal malpractice." Each of the reforms was "tie-barred" to the income tax hike and the bill to create the new sales tax on services, meaning that none of the legislation could become law unless all of it — reforms and tax hikes — was approved by lawmakers and signed by the governor.

Four substantive reforms stood out in the budget deal. The first reform is incorporated in state Senate Bills 418-421. These bills include provisions that allow schools and local governments to form health insurance purchasing pools, but the bills’ primary effect lies in other provisions that essentially deal with MESSA, the health insurance administration affiliate of the Michigan Education Association, the state’s largest school employees union.

Under the bills, a school district (or a local government) would be required to solicit competing bids before awarding a health insurance provider with a contract to provide employee health insurance — a provision that supplies mandatory competition to MESSA,
which currently holds health insurance contracts with most of the state’s school districts. In addition, the bills require MESSA to furnish a district with the district’s aggregate claims history under MESSA insurance plans. Release of the claims history data was bitterly opposed by MESSA and the MEA, but other health insurers typically provide such information to client districts, enabling those districts to solicit meaningful bids from other insurance providers.

The MESSA reforms were prompted by the high cost of MESSA insurance to school districts and MESSA’s relationship with the MEA, which has received substantial fees from MESSA for fighting for MESSA insurance coverage during collective bargaining with school districts. A Detroit News Op-Ed by Ryan S. Olson, education director for the Mackinac Center for Public Policy, recently underscored the burden of MESSA’s insurance costs by reporting that due to MESSA cost increases, the MEA was now balking at giving its own employees MESSA’s top-tier insurance plan to cover their retiree health benefits. The resulting impasse with the MEA’s staff over the MESSA plan nearly resulted in the MEA’s being picketed by its own workers.

The second substantive reform came with Senate Bill 622, which repeals a prohibition on the Department of Corrections’ contracting with third parties to privatize mental health services for prisoners (under current law, the department may "contract" only with the Department of Community Health).

Competitive contracting with private businesses for government services has been the subject of considerable research over several years by Michael D. LaFaive, the Mackinac Center’s director of fiscal policy. This research consistently finds that in the presence of good bidding practices and contract monitoring, such "privatization" of government services can improve services and lower costs.

Michigan prison costs may in fact be inflated. Mackinac Center Senior Legislative Analyst Jack McHugh recently observed in an Op-Ed for The Detroit News that according to an American Federation of Teachers survey, "corrections officers wages ... are almost one-third above the national average for corrections employees."

Senate Bills 546 and 547 make up the third substantive reform. These bills require school employees to contribute more money to their pension and post-retirement health care benefits system. The bills also establish a "graduated" pension and retirement health care vesting system, where the size of the pension and benefits a school employee receives is tied more directly to the number of years worked. Under previous law, an employee who was employed for only 10 years (or five in some cases) could be eligible for a full pension and benefits.

MPSERS has become a significant concern for Michigan taxpayers and the state budget. For instance, a three-part special report regarding MPSERS, entitled "Michigan’s Education Time Bomb," was published by The Detroit News on May 10-12, 2007. This report found that MPSERS is a "costly, loophole-ridden retirement system" that "threatens public schools." In one of the many MPSERS provisions investigated by The Detroit News, "People who worked in state public schools for at least 10 years earlier in their careers can return to work for 102 hours — about 13 work days — at age 60 and receive taxpayer-funded health care for the rest of their lives." The News estimated that this provision cost taxpayers an extra $2 million per year, and the paper concluded that the total magnitude of MPSERS’ costs — $1,015 per student each year — is more than schools pay for "books, buses, computer technology and building maintenance combined."

The final substantive reform, House Bill 4800, repealed a provision of the state employee pension law that allowed an employee to "retire," start collecting a pension and then return to work for the state either directly or through a contractual arrangement with a third party, thus collecting a wage or salary while simultaneously collecting pension benefits. The bill suspended pension payments while an individual worked for the state and also suspended post-retirement health insurance benefits if the person was eligible for employer-sponsored coverage or Medicare (the federal health plan for seniors). This reform was approved overwhelmingly by both chambers of the Legislature: a 38-0 vote in the state Senate, and 97-12 in the state House of Representatives.

The Michiganvotes.org tallies for the votes on the bill which allows prisons to privatize their mental health care, Senate Bill 622; the main bill regarding teacher retirement benefits, Senate Bill 546; and the main bill requiring MESSA to release its claims history, Senate Bill 418 appear below. (The vote tally for House Bill 4800, which passed overwhelmingly in both houses of the Legislature, has been omitted for space reasons. It may be viewed at www.michiganvotes.org/Legislation.aspx?ID=53535.) 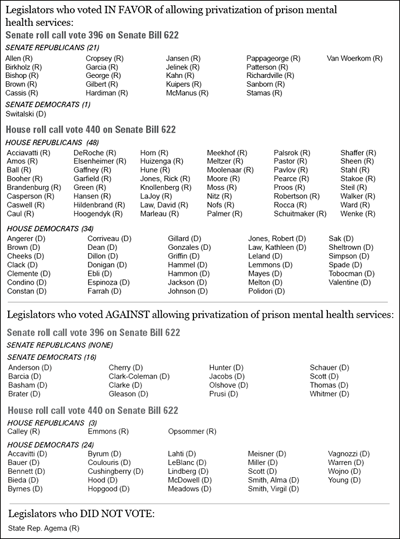 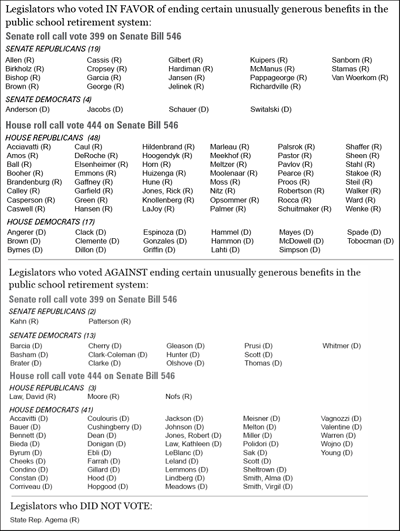