Texas Gov. Greg Abbott is currently reviewing the state business subsidy program known as the Texas Enterprise Fund, and he wants money back from companies that don’t create as many jobs as promised. But an article on his review includes an interesting comment. “The enterprise fund is widely considered the largest deal-closing incentive fund in the country, [emphasis added] meaning it’s designed to provide the final carrot that swings a decision on a corporate relocation or expansion.”

A wide number of people in Texas are mistaken. It wouldn’t even be the second-largest business subsidy program in Michigan, let alone the country.

In addition, Michigan officials paid out $720 million in old Michigan Economic Growth Authority awards to companies that signed MEGA deals between 1995 and 2012. 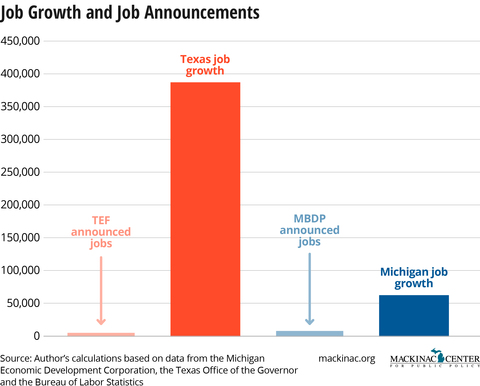 That’s because economic development programs don’t push the needle on the economy, but they do deliver taxpayer cash to select interests at everyone else’s expense. They don’t address economic fundamentals and they misuse the society’s resources instead of putting them to good purposes.

Subsidies won’t drive a state economy, no matter how much politicians want them to. Their reason for existing is not to help a state “compete” with other states, but to show that politicians are doing something about the economy. It’s fundamentally about hype, about trying to change the esteem that people may have about a state rather than about more jobs and better pay for residents.

Lawmakers in Michigan have approved more than $16 billion in business subsidies since 2001. That’s a steep price to pay for the illusion of growth. But apparently enough press releases can convince a wide number of people about a lot of things that aren’t true.

Michigan should stop providing corporate handouts. It can compete without subsidizing select businesses at taxpayer expense. Texas can, too. Both places would be better without it.