The Coalition for the Future of Detroit Schoolchildren recently released a report identifying priorities for public schools in the city that it says are “within reach.” One section discusses the low reading levels of Detroit third-graders and includes the chart below. 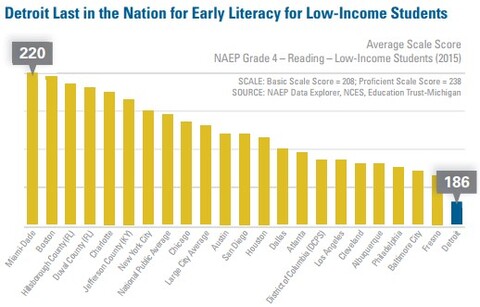 ForTheRecord says: The Detroit Public Schools Community District spends more per student than all but eight of the nation’s 100 largest school districts, or $14,259. Even with all that money, the district still generated the nation’s worst reading scores among low-income students. The Miami-Dade district spends $8,725 per student (some $5,500 less than Detroit), and children from low-income households there had the best literacy rates among large cities.