The city of Detroit owed Wayne County $20 million in 2017 for obligations related to delinquent property taxes and tax-foreclosed properties. The good news is, that’s down from $90 million in 2010.

The charges arise from a delinquent property tax “revolving fund” system authorized by state law. This allows shortfalls in city, village and township property tax collections to be covered by the county. The county essentially gives the local government a check for the amount of unpaid taxes and simultaneously assumes the duty of collecting from the delinquent property owners. After attempts by the county to recoup unpaid property taxes, the locals must pay whatever shortfall is left. This is called a “charge back.”

The decline in debt from 2010 is helping the city’s cash flow, and it also offers insights into Detroit’s troubled record on property tax delinquencies and foreclosures.

According to city documents and officials, the improvement in finances is due in part to a nearly $4 billion drop in property tax assessments in the last decade. The drop means lower property taxes for property owners – and fewer late or unpaid taxes.

“Between tax years 2008-17, Detroit properties lost nearly $4 billion in taxable value. This was a result of many factors including, but not limited to, a major economic recession and a reduction in city population,” Detroit Deputy Treasurer Justin Bahri said in an email statement. 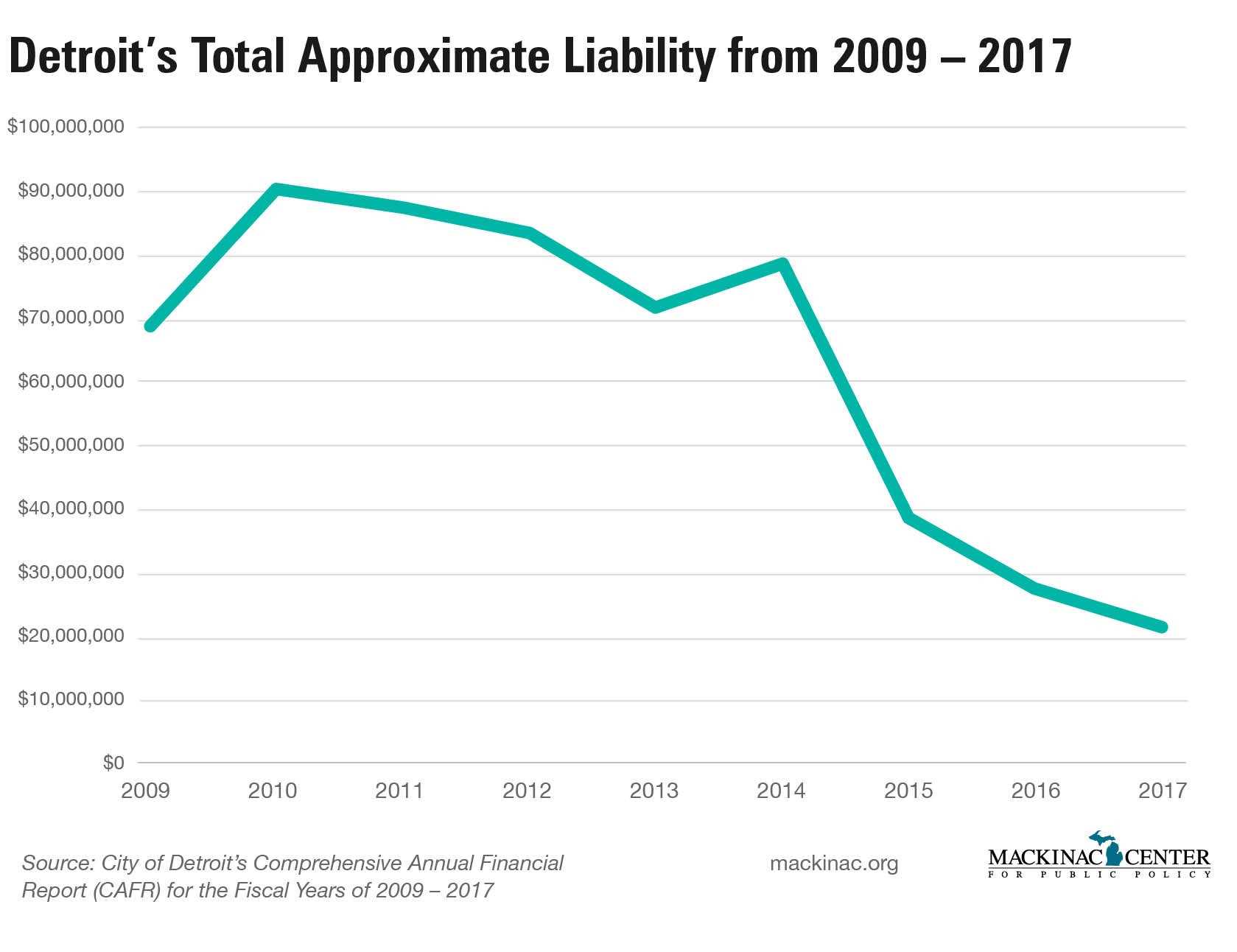 “As a result of the decrease in taxable value, the amount of property taxes billed between the aforementioned tax years has decreased by nearly 33 percent,” Bahri said. “As we bill less (and collect more), we should expect to see a downward trend in the amount of properties and balances that are transferred to the County Treasurer when delinquent.”

As reported on June 14 in The Detroit News, “the city completed a citywide reassessment in 2016, required by the Michigan State Tax Commission. The city had not done a complete reassessment since the 1950s.”

From 2011 to 2015, one in every ten properties that was foreclosed upon in Detroit was done so because of an over-assessment of property value. That’s according to a study by Chicago-Kent College of Law professor Bernadette Atuahene and University of Chicago professor Christopher Berry.

Declining property values are likely not the only reason Detroit’s payments to Wayne County have decreased in recent years. Another reason could be that there are fewer properties on the tax rolls.

Fewer taxable properties in Detroit would result in an improvement in the property tax collection rate even without a significant increase in the number of residents paying their property taxes.

John Roach, director of media relations for Detroit, said in an email, “There are fewer parcels on the tax rolls but they are valued higher now.”

In 2016, Detroit only collected about 78 percent of its property taxes due. Any properties that do not have their taxes paid by a certain time become “delinquent.” As described above, municipalities are required to turn their delinquent properties over to a delinquent tax revolving fund that is run by either the local county or the state.

In return for its delinquent property taxes, the local government receives an upfront payment from its county totaling the amount of unpaid delinquent taxes. At this point, the county will get to keep all the proceeds from the fees, fines, interest, and sale of the foreclosed properties.

When a property owner is unable to pay property taxes on time, several things happen. In Detroit, the treasurer of Wayne County attempts to notify property owners to pay delinquent taxes and warn them that their property could be subject to foreclosure.

If the owner still does not pay the taxes due, the property will be foreclosed upon, and, after a time, be transferred by a judge to the county, to be sold at an auction.

Once the property is sold at the auction, the money received is used to cover the cost of the property taxes owed as well as costs associated with the auction. As a result, a county may make a profit.

Wayne County had a net profit of $69.1 million from 2009 to 2016. This is according to the Annual Report of Property Sale Proceeds from the Office of the Wayne County Treasurer.

When a property doesn’t sell, or the sale proceeds are not sufficient to cover the unpaid taxes, the city of Detroit becomes liable to the county for the unpaid amount.

After increasing in 2009, Detroit’s debt from these transactions to Wayne County has been decreasing.

Editor’s note: This article has been updated to properly reflect that from 2011 to 2015, one out of every four properties in Detroit entered the foreclosure process due to unpaid property taxes.