The liberal nonprofit Progress Michigan claims its mission is to “provide a strong credible voice” in the state’s public policy debates.

But an op-ed in the Holland Sentinel written by the political group’s communications director came with claims not backed up by evidence that Republicans are indifferent to the state of Michigan’s roads.

“My Take: Republicans don’t care about the damn roads” was the headline on Sam Inglot’s op-ed. Inglot is the deputy communications director of Progress Michigan.

In the column, Inglot states, “Republicans still have no plans to fix our roads. ... Republicans, on the other hand, have sat on their hands and we haven’t heard anything about a roads plan. That’s unacceptable.”

Another Inglot claim was: “For too long, Republicans have ignored the lack of resources for public infrastructure and the need for revenue to fix it.”

Michigan is projected to have increased transportation spending by a total of $7.4 billion in state funds over an eight-year period, according to the nonpartisan Senate Fiscal Agency.

Republicans enjoyed a “trifecta” for eight years, during which time they controlled the state House, Senate and governor's office. Annual state transportation spending in the current state budget — the last enacted by the all-Republican government — is about 85 percent higher than it was at the start of the trifecta.

The $7.4 billion figure is based on the cumulative amount that state dollars in the transportation budget for each year exceeded state spending in the baseline 2010-11 fiscal year. 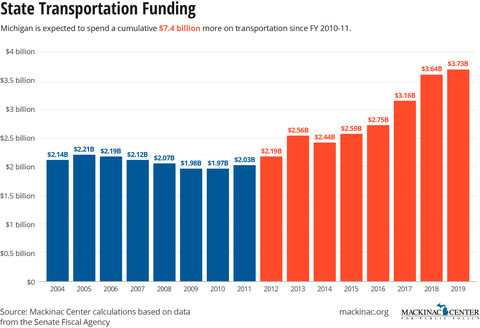 Inglot did not respond to an email seeking comment. Progress Michigan is a tax-exempt nonprofit that is required to file annual reports with the Internal Revenue Service. In 2017 its total revenues were listed at $374,835, down significantly from the election year of 2016, when it reported total revenues of $1.07 million. Progress Michigan’s board of directors includes communications staffers from unions such as the Michigan Education Association (Doug Pratt) and the International Union of Operating Engineers Local 324 (Lisa Canada).