An analysis of 16 key public and private sector unions in Michigan - the birthplace of organized labor - shows that their membership numbers have seen a steep decline. This comes as Michigan approaches the eight-year anniversary of adopting a right-to-work law, which makes it illegal to force workers to pay money to a union as a condition of keeping a job.

The Michigan Education Association, long the largest government employee union in the state, has lost 33% of its members. Dues revenue is down 21% (the union hiked dues on its members a few years ago). The MEA has managed to stabilize finances, partially by stripping benefits from its own former employees.

Overall, union membership among state employees is also down. A recent decision from a Michigan Civil Service Commission requires unions to now obtain “affirmative consent” from workers every year in order to keep collecting dues from them. The number of unionized state employees has dropped by nearly 30%, costing six key unions millions in revenue. 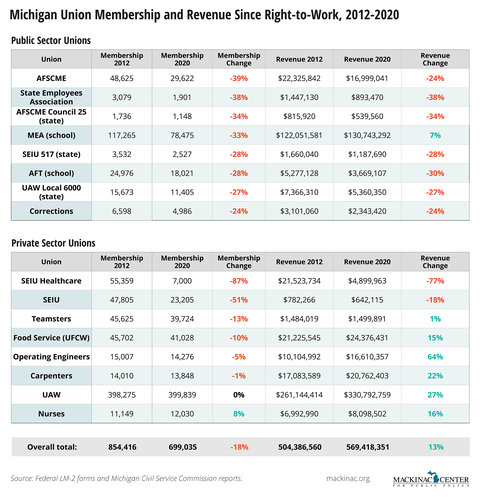 These declines come despite government worforce numbers that have stabilized after a decade of losses that began with the great recession. The number of school employees since 2012 has held steady at around 180,000. The state government's own workforce has also remained steady at around 48,000 workers. In other words, the membership losses are mostly the product of existing workers choosing to leave their union, rather than a loss of workers overall.

In the private sector, the recovery of the auto industry has prevented the United Auto Workers from losing overall membership. Increased hiring has been roughly equal to the number of employees choosing to no longer pay dues to the union. But the UAW is embroiled in a corruption scandal and a lawsuit from an ex-employee over a “ghost union” which may not hold well for the future.

The large loss in union membership are also affecting the political landscape in Michigan. In an article shortly after the 2018 midterms on “How the Democrats Took Back Michigan,” The Atlantic noted that unions came up short.

Not everyone delivered. Officials in the state party were surprised, for example, to see several of the unions falling short of their promises, their leaders apparently themselves not realizing just how much the state’s right-to-work law had cut their ranks.

For decades, the main players in Democratic politics have been the United Auto Workers and Michigan Education Association. But when dues-paying membership declines so does union money, organization and “boots on the ground” in politcal campaigns come election time. In Michigan, a powershift is underway. 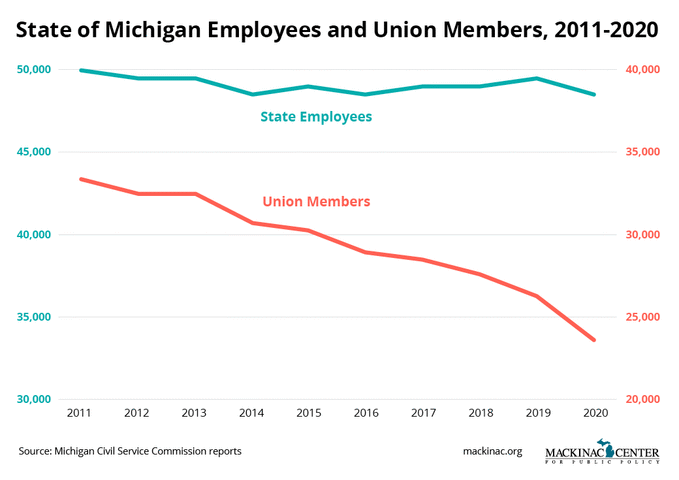