At a time when some politicians are calling Michigan’s roads dangerous, state funding for transportation is projected to have nearly doubled over a 10-year period.

State dollars dedicated to transportation in Michigan are projected to have increased from $1.97 billion in 2010-11 to $3.93 billion in the 2020-21 state fiscal year. The figures include state money only, not federal or local dollars.

The 10-year projection is based on tax rates and revenue sources specified under current law, which could change. For example, a $600 million state income tax earmark for road repairs authorized for 2020-21 is opposed by Gov. Gretchen Whitmer, who is also pushing for a 45 cent per gallon gas tax increase. The income tax earmark was part of a legislative road repair push in 2015 that included a 7 cent per gallon gas tax hike and 20 percent vehicle registration tax hike.

Given that the Legislature is controlled by Republicans, neither the fund-shift proposal nor the large tax increase preferred by the new Democratic governor is assured. The gas tax increase would take about $599 annually from the average Michigan household, which has two cars that each burns about 666 gallons of gas.

But given political demands on both parties to “fix the roads,” the 2020-21 transportation revenue projection cited here may be low.

State funding for transportation has also increased over the last 20 years when adjusted for inflation. In the 2000-01 fiscal year, the transportation budget included in $2.10 billion in state dollars, which would be the equivalent of $3.02 billion in 2019 dollars. 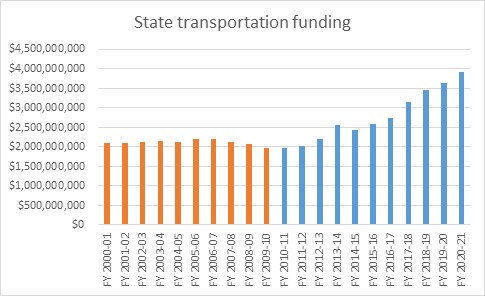