According to a recent state report, 40% of the Michigan roads evaluated in 2018 were in poor condition. The proportion of roads in bad shape has increased from a low of just 10% in 2004, rapidly at first but then more slowly. The initial decline in quality occurred during a period of stagnant transportation spending, but the trend continued even after state funding increased after 2012.

This suggests that the link between higher spending on roads and better pavement quality over time is complicated.

The percentage of Michigan roads in poor condition was just 10% in 2004. The figure rose to 33.77% in 2013, and stood at 40.51% in 2018, according to a state Transportation Asset Management Council report. State transportation funding was stagnant-to-lower during the first part of that period. The 2013 transportation budget authorized spending $2.19 billion in state tax money, a $500 million decline after adjusting for inflation.

But state transportation spending began increasing in 2013, and by 2018 it had risen to $3.16 billion. More spending did not translate into fewer roads in poor condition, however. In 2018, poor roads made up 40.51% of those assessed.

In a seeming paradox, the percentage of Michigan roads rated as “good” by state transportation officials has remained relatively the same over the past 13 years, even as the proportion at the other extreme rose.

Michigan Department of Transportation Communications Director Jeff Cranson said that approximately 9,700 of the miles listed in the report are “high-level ‘trunklines,’ meaning interstate and U.S. and M routes.”

“In terms of what is being done to improve those numbers, that is the primary objective of the governor’s budget proposal that would invest $1.5 billion more per year in state trunklines,” Cranston added.

One reason why higher spending has not been matched by better roads is the rising cost of road repairs. Money for repairs comes out the Michigan Transportation Fund, which is supported by vehicle registration and motor fuel tax revenues.

“In fiscal year 2019, MTF revenues only have 65% of the purchasing power that they did 20 years ago as the costs to construct and repair our roads have escalated over time,” according to a road funding plan proposed by Gov. Gretchen Whitmer earlier this year. 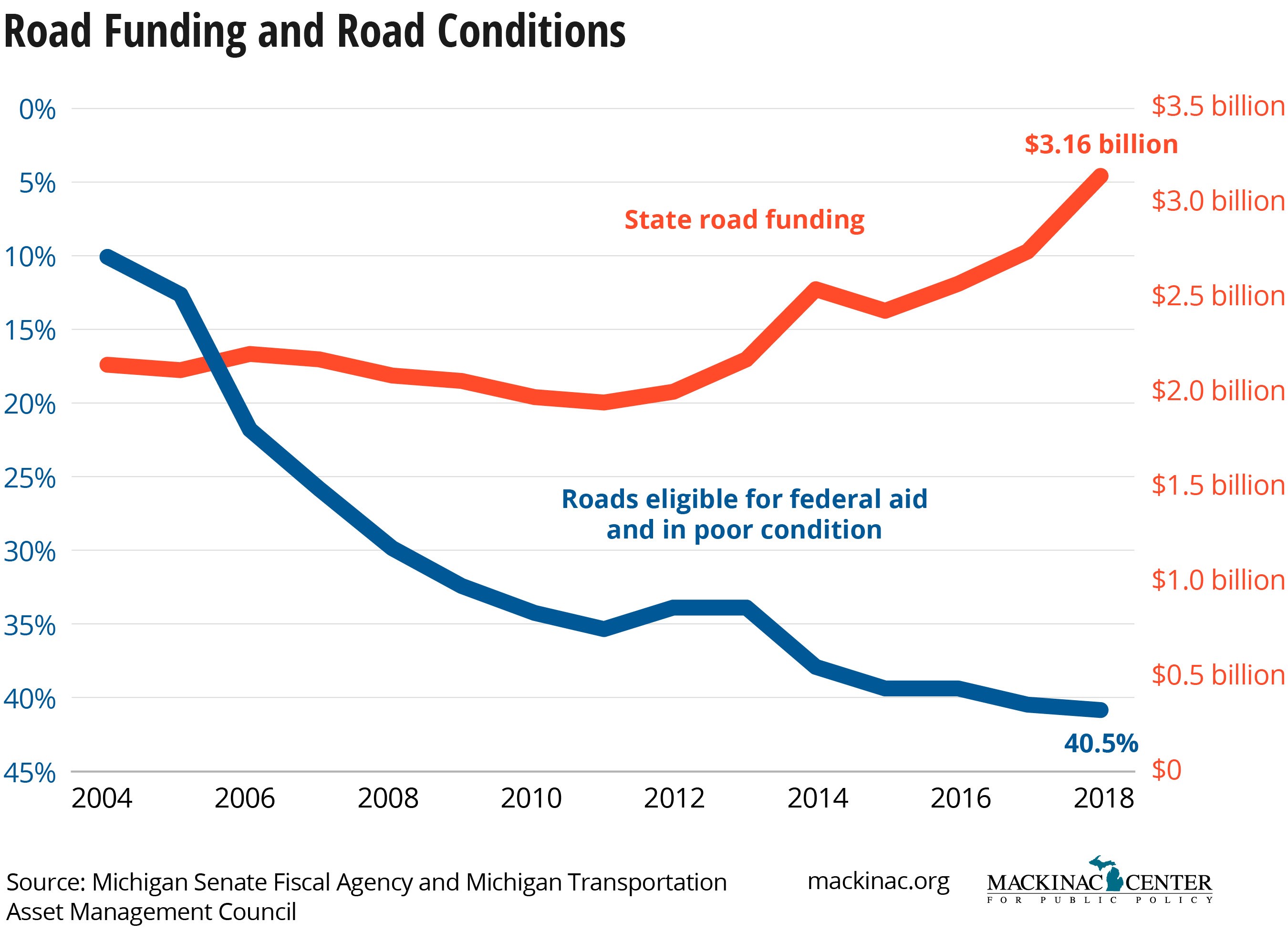 Another factor that complicated the picture was state debt: The state borrowed to pay for more road repairs in the short run but at the expense of reducing the amount of money available in subsequent years. Between 2000 and 2009, the amount owed for past road repairs rose from $600 million to $2.3 billion. Paying the principal and interest on this debt has meant that since 2009, the state has had around $200 million a year less for current road repairs.

Whitmer has called for increasing the gas tax by 45 cents per gallon. Spending would be concentrated on the most highly traveled roadways, with just six percent earmarked for local bridges and rural economic corridors.