Oxford Township's repeated attempts to build a much-needed hospital have been thwarted by the Michigan Department of Health and Human Services.

A 2019 study found that Oxford needs 121 hospital beds, township Supervisor Jack Curtis told Michigan Capitol Confidential. Beaumont Hospital Systems offered $225 million to design and build a hospital, and received approval from the planning commission. Oxford worked with Beaumont for over a year, and invested more than $3 million in infrastructure and sewage improvements to prepare for the hospital.

But in February 2020 the project came to a stand-still because of certificate of need laws. 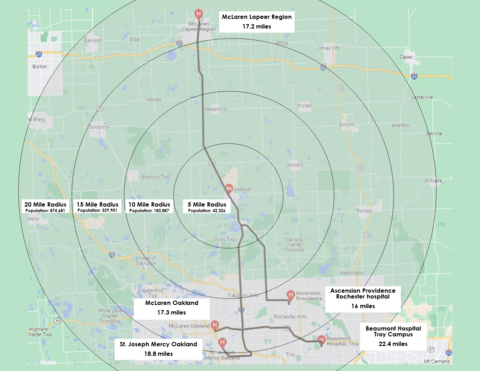 Michigan is one of 35 states with CON laws. Before expanding or opening a new facility, health care providers must receive permission from a certificate of need commission, which operates under state Health and Human Services. Members of that commission may represent competitors to the proposed facility, in this case doctors and administrators from other hospitals, making it less likely that permission will be granted.

The Federal Trade Commission has called for the repeal of all state CON laws, on the grounds that they prevent efficiently functioning health care markets, which harms consumers by limiting options and inhibiting innovation.

Certificate of need regulations are “anti-patient, anti-competitive enterprise, and bad for the healthcare marketplace,” Lindsay Killen, a vice president at the Mackinac Center for Public Policy, told CapCon.

Certificate of need laws are intended to “balance the cost, quality, and [accessibility] of Michigan’s health care system,” according to the Department of Health and Humans Services. But Curtis, the township supervisor, said navigating the CON requirements “is the worst nightmare you ever want to live.”

To apply for a certificate of need, providers must undergo a lengthy and complicated submission process, with fees ranging from $3,000 to $15,000 depending on the scope of the project.

“The bureaucratic nightmare of the Michigan Department of Health and Human Services doesn’t work for the health and benefit of any community. Every hospital group has fought Beaumont from coming,” Curtis said.

The CON commission uses a limited area access methodology to determine a community’s need for a hospital. In 2021, a Standard Advisory Committee worked for six months to create a new methodology that includes travel time. This redefined a limited access area as a place located more than thirty minutes from a hospital.

The new methodology used data from a study on traffic volume in Oxford, and determined that the township no longer had a need for a hospital. However, the data are inaccurate, Curtis said.

The study was conducted in 2020 during major reconstruction of the M-24 highway and at the height of the pandemic, when people were working from home. The main intersection went from 32,000 cars passing through it daily to only 12,000 cars. This skewed the data, making it appear that travel time to hospitals is not an issue in Oxford.

“It’s a shame. We have a private company that wants to spend $225 million to give us a hospital, but can’t,” Curtis said. “The CON commission has a process that takes years and years, and once we get there, they yank it away from us, which is just incredibly disappointing.”

Oxford and the surrounding communities of Orion, Brandon, Addison, and Oakland have all grown in recent years. This has resulted in traffic congestion and lengthened trips to the hospital.

The lack of hospitals results in an average time of 25 minutes from an ambulance picking up a patient to arriving at a hospital, Curtis said. Each time an ambulance responds to a call, three people must be in the vehicle, which draws resources away from other mutual aid communities when emergencies arise.

“Our community suffers every day and is really getting hammered without a hospital,” Curtis said, adding that Oxford replaces ambulances that are only two years old because they have already exceeded their mileage limits.

The urgent need for a hospital came to the forefront after the November 30, 2021 Oxford shooting.

Curtis has spoken at several CON commission meetings, including the most recent June 16 meeting.

“All I get is public comment at the CON meeting. I can’t get on their agenda. All we get to do is talk, no action plans,” Curtis said.

Because of the election year, Oxford has received many promises, but few results, Curtis said. After the Oxford shooting, many politicians visited the township, but no action has been taken to improve the hospital situation.

“I just wish the friendship we made with Whitmer and Gilchrist could break through to actual results. They wanted a nice picture at Oxford, made promises, then left. And we still don’t have a hospital,” Curtis said.

In an email to Michigan Capitol Confidential, Lynn Stufin, a spokesperson for MDHHS, said the Beaumont Hospital is within a limited access area, but the applicant has not demonstrated that the hospital will serve a population of 50,000 or more.

“The CON Commission has heard testimony on this issue and voted to review the bed need calculations when they are due next in late 2022,” Stufin said. “From there the Commission will decide the next course of action once the data is provided.”

Have gun, will audit: With 87K new IRS agents, how many will be armed?

WEF comes to Michigan, but who will go to Davos?