Calling the gas stove “a hidden hazard,” Richard Trumka Jr. said this week that the U.S. Consumer Product Safety Commission will look to regulate gas stoves. A ban on gas stoves could result.

“This is a hidden hazard,” Trumka, a commissioner of the agency, said in an interview with Bloomberg News. “Any option is on the table. Products that can’t be made safe can be banned.”

The Bloomberg report notes that 40% of American households use gas stoves. The push for a ban on gas stoves results from a journal article published last month, which “found that more than 12% of current childhood asthma cases in the U.S. can be attributed to gas stove use.”

The Bethesda, Maryland-based Consumer Product Safety Commission, which has a staff of roughly 500, plans to open public comment on hazards posed by gas stoves later this winter. Besides barring the manufacture or import of gas stoves, options include setting standards on emissions from the appliances, Trumka said.

Lawmakers have weighed in, asking the commission to consider requiring warning labels, range hoods and performance standards. In a letter to the agency in December, lawmakers including Senator Cory Booker of New Jersey and Representative Don Beyer of Virginia, both Democrats, urged action and called gas-stove emissions a “cumulative burden” on Black, Latino and low-income households that disproportionately experience air pollution.

In September 2020, soon-to-be First Lady Jill Biden tweeted a photo of herself, cooking on a gas stove. Will the Bidens be transitioning away from a gas stove themselves? 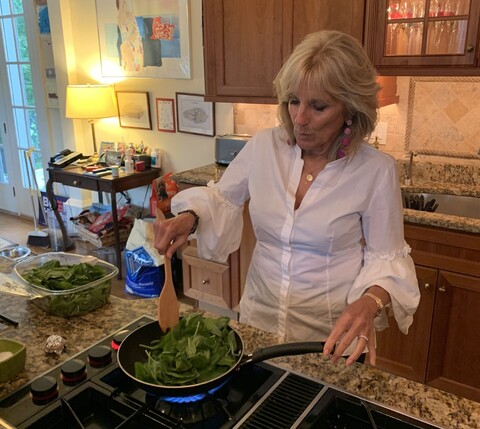 Trumka Jr. is the son of the late Richard Trumka, who was president of the AFL-CIO labor union.

Trumka, on Twitter, told a congressman that the commission “isn't coming for anyone's gas stoves,” adding that “regulations apply to new products.”

Trumka then noted there’s an $840 rebate available for those who transition from gas stoves to electric, courtesy the Inflation Reduction Act.

President Joe Biden nominated Trumka Jr. to his post in July 2021. Trumka’s father died the next month at the age of 72.