Gov. Rick Snyder, with legislative approval, cut funding for higher education in his first budget. But state support has crept upward ever since and now is higher than when Gov. Snyder took office in 2011. It is a pity that there is not much to show for this extra spending.

The governor’s first budget reduced the amount of tax dollars going into the higher education annual budget by $220.5 million, from $1.5 billion to $1.3 billion. From there it has increased over time by a combined $251.8 million, with another annual bump of $28.2 million proposed for next year.

No matter if state support goes up or down, tuition rates for students continue to climb. Universities responded to the one-year decline in support with a 14 percent increase in tuition. Even after the state started increasing payments to state universities, tuition and fees kept rising. Average annual undergrad tuition increased by $2,471, a 24 percent increase from the 2011-2012 school year, according to state reports. 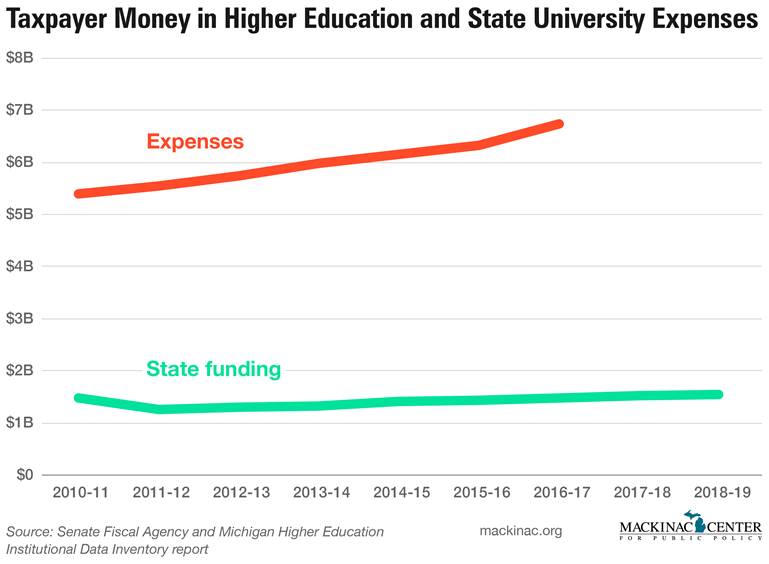 Yet many policymakers want to put even more money in state universities. There is no reason to expect that universities will do much with the additional money. Fewer students from Michigan are attending the state's universities, however, a drop of 17,500, or 7 percent, from 2011.

Even if there were more students attending Michigan public universities, the extra state aid would not improve outcomes. More taxpayer money devoted to higher education doesn’t generate a better educated state population. It has even less to do with overall state prosperity. At best, the additional money reduces the rate of increase in tuition and fees that state residents would pay to attend state universities.

The decrease in the number of state residents attending state universities may provide some pressure for universities to be cost conscious. The state’s aging demographic means that there are fewer Michigan students graduating from high school, and state universities are competing with each other over a smaller customer base. But university costs keep rising anyway. Until universities need to cut costs in order to compete, costs are likely to continue to increase. And an extra $28.2 million from taxpayers next year isn’t going to change that.

‘No Way To Cut State Budget’ — Not Even These Items?