Consumers Energy is planning to completely eliminate its ability to generate electricity with coal- and nuclear-powered facilities by 2040 and reduce its natural gas-powered generating capacity as well. Its customers will instead depend on renewable sources and power purchased from elsewhere for much of the electricity they use.

The regulated utility’s plan represents a fundamental change in the structure of Michigan’s electricity market. Specifically, it shifts away from an electricity grid that’s largely supplied by conventional generation sources that consistently produce “baseload power” and are supplemented by smaller generators that can be revved up during hours of peak demand.

Michigan families and businesses will instead rely on a system that is capable of producing far less baseload power and heavily depends on intermittent renewable sources, including solar and wind. These intermittent sources also will be buttressed by programs to encourage customers to use less electricity. The utility will use stored power from facilities like the Ludington Pumped Storage Plant and buy power from other utilities outside the state.

Steven Transeth, who served as a commissioner on the Michigan Public Service Commission from July 2007 to January 2010, believes Michigan’s utilities must move away from generating electricity with fossil fuels.

“We have to move towards [clean energy generation] and even though some of that, the regulatory environment, especially from the federal level, has been somewhat less stringent as it may have been, I think that we’ll probably return to less carbon-based generation facilities,” Transeth said in a phone interview. “The renewables are going to be front and center, with natural gas being the backup to ensure we have continual power.”

Jason Hayes, the director of environmental policy at the Mackinac Center for Public Policy, said he believes the utility’s plans are risky.

“Consumers’ planning documents take pains to present this as something reasonable and prudent, but what they’re doing is, at its core, risky and untried,” Hayes said in a phone interview. “They’re moving from a system that has been deliberately developed with an overcapacity of baseload and peaking generation resources and moving to a primarily non-dispatchable system.”

”Dispatchable power” refers to generation sources that can be “dispatched” – turned on or off, or have their power output adjusted – as the amount of electricity required changes. Dispatchable power sources include natural gas, nuclear, coal and hydroelectric. Wind and solar, by contrast, are not dispatchable. That is because they can only produce electricity when the wind is blowing, or the sun is shining.

In addition, the company is planning to construct battery storage facilities that could provide up to 450 megawatts of electricity for a limited number of hours.

In 2040, the utility’s Jackson and Zeeland generating plants, which use natural gas, will still be working and providing 1,385 megawatts of consistent, or baseload power.

The largest component of Consumers electricity generating capacity in 2040 — its “portfolio” in industry terms — will be solar arrays. The company estimates that it will install solar arrays that cover between 25,000 to 35,000 acres by 2040.

On average, it is sunny or partially sunny in Detroit 49 percent of the year, 47 percent in Flint, 44 percent in Grand Rapids and 48 percent in Lansing, according to a report from the National Centers for Environmental Information.

Consumers Energy documents show the company expects to rely heavily on electricity from out-of-state generators by 2040. In response to questions about the challenges to solar generation posed by Michigan’s climate, a statement from the company said it had factored in those challenges. The statement also pointed to the potential cost savings of changing the portfolio.

“Our sophisticated computer models considered the relative reduction in energy production that may occur in the winter and during less optimal days and continues to project that solar energy will often be the lowest cost option for customers in the future,” the statement said. “In addition, solar energy is most valuable to us during peak load days, which are usually in the middle of summer when it is hot and sunny.” 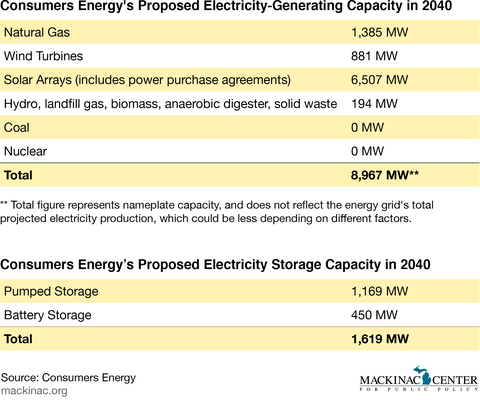