(Note: The commentary below first appeared in the October 2006 issue of The Freeman, the journal of the Foundation for Economic Education.)

A few months ago, I walked into a restaurant in Naples, Fla., and said "A nonsmoking table for two, please." The greeter replied, "No problem. All restaurants in Florida are nonsmoking by law. Follow me."

For a brief moment as we walked to our table, I thought to myself: "Good. No chance of even a whiff of a cigarette. I like that!"

And then I felt shame. I had fallen victim to the statist impulse. For 40 years, I thought I was a passionate, uncompromising believer in the free society. Yet for a few seconds, I took pleasure in government trampling on the liberties of consenting adults in a private setting.

This incident troubled me enough to think about it a long while. I wanted to know why my first instinct was to abandon principles for a little convenience. And if a committed freedom-lover like me can be so easily tugged in the wrong direction, what does that say for ever getting nonbelievers to eschew similar or more egregious temptations?

At first, I thought about the harm that many doctors believe secondhand smoke can do. Perhaps it wasn't wrong for government to protect nonsmokers if what we have here is a case of one person imposing a harmful externality on an unwilling other. Then I quickly realized two things: no one compelled me to enter the place, and the restaurant belonged to neither the government nor me. The plain fact is that in a genuinely free society, a private owner who wants to allow some people in his establishment to smoke has as much right to permit it as you or I have to go elsewhere. It's not as though people aren't aware of the risks involved. Moreover, no one has a right to compel another citizen to provide him with a smoke-free restaurant.

Besides, I can think of a lot of risky behaviors in which many adults freely engage but which I would never call upon government to ban: sky diving and bungee-jumping being just two of them. Statistics show that merely attending or teaching in certain inner city government schools is pretty risky too - and maybe more so than occasionally inhaling somebody's smoke.

The statist impulse is a preference for deploying the force of the state to achieve some benefit — real or imagined, for one's self or others — over voluntary alternatives such as persuasion, education or free choice. If people saw the options in such stark terms, or if they realized the slippery slope they're on when they endorse government intervention, support for resolving matters through force would likely diminish. The problem is, they frequently fail to equate intervention with force. But that is precisely what's involved, is it not? The state government in Florida did not request that restaurants forbid smoking; it ordered them to under threat of fines and imprisonment.

I tried this reasoning on some of my friends. Except for the diehard libertarians, here were some typical attitudes and how they were expressed:

Delusion: "It's not really 'force' if a majority of citizens support it."

Paternalism: "In this instance, force was a positive thing because it was for your own good."

Dependency: "If government won't do it, who will?"

Myopia: "You're making a mountain out of a molehill. How can banning smoking in restaurants possibly be a threat to liberty? If it is, it's so minor that it doesn't matter."

Impatience: "I don't want to wait until my favorite restaurant gets around to banning it on its own."

Power lust: "Restaurants that won't keep smoke out have to be told to do it."

Self-absorption: "I just don't care. I hate smoke and I don't want to chance smelling it even if a restaurant owner puts the smokers in their own section."

On a larger scale, every one of these arguments can be employed - indeed, they are invariably employed — to justify shackling a people with intolerable limitations on their liberties. If there's one thing we must learn from the history of regimes, it is that you give them an inch and sooner or later, by appealing to popular weaknesses, they will take a mile. The trick is getting people
to understand that liberty is more often eaten away one small bite at a time than in one big gulp, and that it's wiser to resist liberty's erosion in small things than it is to concede and hope that bigger battles won't have to be fought later.

Delusion, paternalism, dependency, myopia, impatience, power lust and self-absorption: All are reasons people succumb to the statist impulse. As I pondered this, it occurred to me that they are also vestiges of infantile thinking. As children or adolescents, our understanding of how the world works is half-baked at best. We expect others to provide for us and don't much care how they get what they give us. And we want it now.

We consider ourselves "adults" when we learn there are bound-aries beyond which our behavior should not tread; when we think of the long run and all people instead of just ourselves and the here and now; when we make every effort to be as independent as our physical and mental abilities allow; when we leave others alone unless they threaten us; and when we patiently satisfy our desires through peaceful means rather than with a club. We consider ourselves "adults" when we embrace personal responsibility; we revert to infantile behavior when we shun it.

Yet survey the landscape of American political debate these days and you find no end to the demands to utilize the force of the state to "do something." Tax the other guy because he has more than me. Give me a tariff so I can be relieved of my foreign competition. Subsidize my college education. Swipe that property so I can put a hotel on it. Fix this or that problem for me, and fix it pronto. Make my life easier by making somebody else pay. Tell that guy who owns a restaurant that he can't serve people who want to smoke.

I wonder if America has become a giant nursery, full of screaming babies who see the state as their loving nanny. It makes me want to say, "Grow up!"

Societies rise or fall depending on how civil its citizens are. The more they respect each other and associate freely, the safer and more prosperous they are. The more they rely on force — legal or not — the more pliant they are in the hands of demagogues and tyrants. So resisting the statist impulse is no trivial issue.

In my mind, resisting that impulse is nothing less than the adult thing to do.

Postscript: House Bill 4163 of 2007, now pending before the Michigan Legislature, would prohibit a business owner, including the owner of a bar or restaurant, from choosing to allow smoking in his or her establishment. The state Senate and House of Representatives have approved this bill in slightly different forms, but have a dispute regarding whether to apply the bill to certain casinos and this has prevented it from being presented to the governor.

The House voted on Dec. 5, 2007, with 10 Republicans joining 46 Democrats to approve the legislation with 56 votes — the narrowest possible margin. The Senate voted 25-12 in favor of the bill on May 8, 2008, with 9 Republicans joining 16 Democrats. The MichiganVotes.org vote tally for House Bill 4163 is below. Find the contact information for all lawmakers at www.mackinac.org/9313 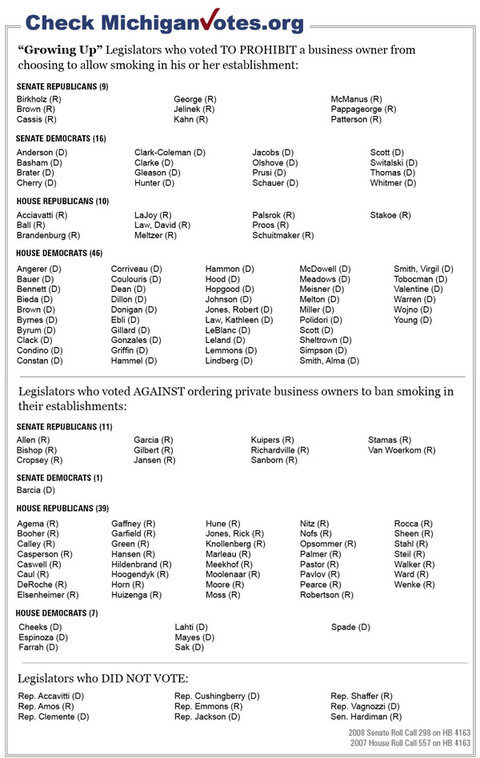 Lawrence W. Reed is president emeritus of the Mackinac Center for Public Policy.
For additional information and an opportunity to comment on this issue, please see www.mackinac.org/9795.