On Sept. 18, the Michigan Legislature overwhelmingly approved Senate Bill 213, which mandates that by 2015 electricity suppliers acquire at least 10 percent of their power from "clean" and "renewable" sources and pass along the additional costs to their customers.

In addition to wind and solar, the alternative power sources allowed under the mandate include biomass, geothermal, and more, but not nuclear energy, which already accounts for almost 26 percent of the electricity generated in Michigan and produces none of the carbon emissions that some believe cause a harmful rise in global temperatures. (The new law would also allow for some restricted use of clean coal technology to meet the mandate.)

To offset anticipated cost increases from the alternative energy mandate, the electric utilities, whose prices are regulated by the Michigan Public Service Commission, would be permitted to hike rates by as much as $3 per month on residential customers, $16.58 per month for small businesses and $187.50 per month for larger business customers. Some of the residential customers could take advantage of a temporary and partial income tax credit to help offset these increases. The legislation gives the MPSC the authority to defer the mandate if the commission decides that the cost imposed on the utilities is too high.

Government mandates would not be necessary if renewable energy sources were abundant and cost-effective, according to "Proposals to Further Regulate Michigan's Electricity Market," a policy brief published by the Mackinac Center in May. Co-authored by Center adjunct scholars Diane S. Katz and Dr. Theodore Bolema, J.D., the report quotes an energy industry representative: "Fossil units and nuclear power have a huge inherent cost and deliverability advantage over renewables due to the concentrated energy in the fuel compared to the diffuse and variable energy of wind, solar and hydro."

Quite literally, energy that is 'blowin' in the wind' is much more difficult and expensive to collect and convert into electricity than energy that is already stored in small, dense packages.

Katz and Bolema also point out that economic and energy experts disagree regarding how much electrical generation capacity Michigan is going to need over the coming decade. The brief cites a recent report from the former MPSC chairman that projects a 1.3 percent annual growth in power needs through 2025. This new estimate had been cut 40 percent from what the MPSC projected just one year earlier.

Other observers predict even less usage. The authors note a December 2006 report created for the Michigan House of Representatives by the Anderson Economic Group that projected Michigan's existing capacity would be "adequate" to meet future needs. And Mackinac Center Senior Economist David Littmann, former senior economist for Comerica Bank and a veteran expert on Michigan's economy, is estimating that the state's ongoing loss of jobs, income and population will lead to a net reduction in electricity demand.

Regardless of whether just a little bit of extra power is needed or none at all, Senate Bill 213 may increase the cost of keeping the lights on if government mandates are permitted to replace market decisions regarding electricity generation.

Moreover, if the proponents of the mandate seek a smaller "carbon footprint" for Michigan's electricity industry, then they have excluded one of the most economically viable energy alternatives for bringing about this goal. Nuclear power produces zero carbon emissions and already supplies more than one-quarter of Michigan's electricity with just three power plants. Many developed economies, such as France and Sweden, acquire a substantially larger share of their power from nuclear energy: 77 percent of France's electric power comes from 59 nuclear reactors.

But if more electricity were generated from nuclear fuel, it would not count as part of the 10 percent renewable mandate created by Senate Bill 213.

Senate Bill 213 was tie-barred to House Bill 5524, which mandated additional changes to Michigan's energy laws. A tie-bar means that one bill could not become law without the other. This second bill was a complicated mix of alterations that both reform and restrict market competition. Michiganvotes.org describes the bill as such:

"...would mostly end the state's electric competition law that allows customers to choose an alternative provider; allow the utilities to impose surcharges on customers so they can recoup the 'costs' incurred from Michigan's experiment with competitive electricity markets; and phase out over five years the current cross-subsidization of residential customers by commercial and industrial ones. The bill would guarantee DTE and Consumers Power at least 90 percent of the utility business in the areas they serve, even if other providers offer lower prices."

According to Katz and Bolema, Michigan's "experiment with electricity competition" coincided with substantial cost savings for ratepayers. Four years after other suppliers entered Michigan's consumer electricity market, prices had fallen by 2 percent, even though prices nationwide increased by about 12 percent. The lower rates drove Michigan electricity costs below the national average, saving businesses and schools millions of dollars. The authors recommend that this experiment be continued and that other distortions in the electricity market be removed as well.

Hillsdale College economics professor Gary Wolfram, a spokesperson for the competitive energy providers, asserted that House Bill 5524 is "primarily designed to provide a monopoly of energy production for Detroit Edison and Consumers Energy."

However, there is a pro-market reform contained in the bill that removes the discriminatory practice of forcing artificially higher rates on commercial customers to subsidize artificially low rates for residential customers. The Michigan Chamber of Commerce asserts that this bias had been in place for 30 years and essentially acted as a $350 million tax on Michigan employers. The Mackinac Center report recommended removing this market distortion, pointing out that it not only impeded proper market competition, but also discouraged energy conservation amongst residential customers.

House Bill 5524 ends this policy, known as "rate-skewing," over a five-year period, and is thus one reason why the Michigan Chamber, some other business groups and perhaps some lawmakers supported passage of this bill.

Senate Bill 213-the renewable energy mandate-was supported by 28 Republicans and 55 Democrats in the House of Representatives. Twenty-four House lawmakers, all Republicans, voted in opposition.

In the Senate, all 17 Democrats voted for the renewable energy mandate, along with 12 Republicans. Ten Republicans voted against the bill.

The renewable energy mandate became Public Act 295 of 2008 when it was signed into law by Gov. Jennifer Granholm on Oct. 6.

The Michiganvotes.org vote tally for Senate Bill 213 is below. The contact information for all lawmakers can be found here. 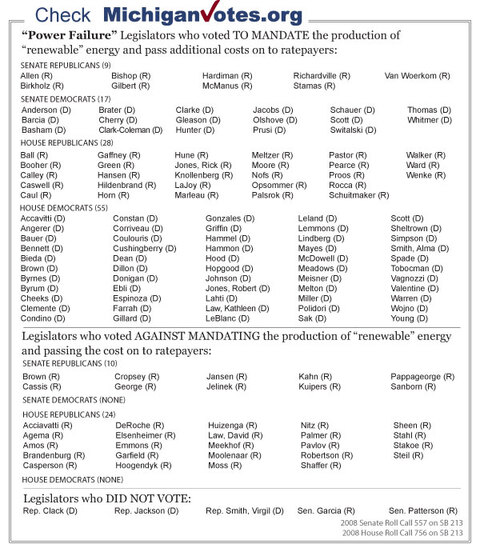 For additional information and an opportunity to comment on this issue, please see www.mackinac.org/9955.