On March 24, for the second time in four months, the Michigan House voted to allow public school districts to hold elections for so-called "sinking fund" millages so as to increase the amount of money taken for operating expenses (see: "Sneak Attack," January/February 2009 Michigan Capitol Confidential). Currently, as a result of passage of Proposal A in 1994, school district operating expenses are funded on a per-pupil basis from the state's School Aid Fund, which is itself funded through a combination of earmarks from the state sales tax, the personal income tax, an education property tax, business taxes and more. According to the Michigan House Fiscal Agency, FY 2008 funding ranged from a minimum of $7,204 per pupil to a maximum of $12,387. Now at $13 billion per year, the SAF is the largest single expenditure of state government.

According to Michiganvotes.org, House Bill 4313 would "allow school districts to levy up to three mills for ten years to buy or fix school buses, and to buy computers" and that "the tax increase election would be either on May or November election days." Under Proposal A, school districts may hold bond elections to construct or make improvements to buildings. Sinking fund mills are currently an extension of this power, allowing districts to put away money to pay principle on those bond debts and to make capital improvements — but not for operating expenses such as school buses and computers. One original justification for Proposal A, approved by 69 percent of Michigan voters, was to put an end to local millage elections for operational funding by creating the SAF's large pool of foundation allowance money at the state level.

Proposal A's constitutional protections against a return to these local millages are such that some legal experts believe that it would require a three-fourths supermajority vote in both chambers of the Legislature to reinstate the millage votes. If true, this would require 83 votes in the House of Representatives, but HB 4313 received only 74 favorable votes on March 24.

According to the HFA, fewer than half of Michigan's school districts now have sinking funds and more than 80 percent of those districts levy less than 2 mills, rather than the 5 mill legal maximum. The Michigan Chamber of Commerce, a staunch opponent of HB 4313, notes that if the use of sinking funds is expanded to operational spending, then there will be a powerful incentive for many more districts to hold sinking fund elections seeking much higher property taxes.

Calculating the potential impact of the sinking fund expansion that the House approved in December 2008, the Michigan Chamber warned that it could lead to property tax hikes of $3.2 billion to $7.6 billion. While the version of HB 4313 passed by the House is restricted to spending on buses and computers, and was thus slightly more limited than the 2008 version, the business group's opposition to expanded taxing power remained high.

"Since 1994," noted a Michigan Chamber statement before the HB 4313 vote, "school funding for operations is up 99% and school debt funding (like sinking funds) is up 269%! It seems logical that administrators should be able to run their districts without trying a sneak attack on taxpayer's wallets." Elsewhere, the Michigan Chamber noted that total inflation was up only 33 percent from the passage of Proposal A in 1994 until 2007.

Rep. Tonya Schuitmaker, R-Lawton, one of the Republicans to vote for the proposal, compared the spending of additional tax dollars by schools to spending by businesses.

"I see it very analogous with companies that need capital improvements for technology," she told MIRS.

Rep. John Walsh, R-Livonia, noted that he initially favored HB 4313, but then turned against it due to "overwhelming" opposition when he pitched the idea to his local businesses.

Another opponent, Rep. Phil Pavlov, R-St. Clair, made note of Michigan's rapidly falling home prices and wondered how raising taxes on those homeowners would bring about better public education.

The Michiganvotes.org vote tally for HB 4313 is below. The bill is now before the Senate Finance Committee, chaired by Sen. Nancy Cassis, R- Novi. See Who Are Your Lawmakers? for contact information on your legislators. 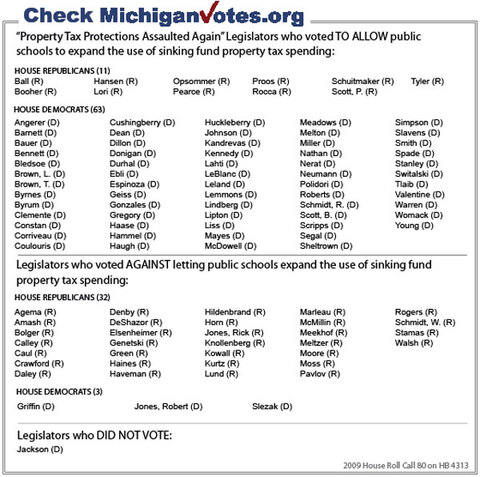 Ken Braun is the senior managing editor of Michigan Capitol Confidential. He may be contacted at author@mackinac.org. For additional information and an opportunity to comment on this legislation, please see www.mackinac.org/10424.