It has been two years since Michigan's film subsidy program became law, which is sufficient for it to have gotten off the ground and had some measureable impact on the state's economy.

According to the most recent Bureau of Labor Statistics, as of September 2009 (the most recent month available*), there were fewer people employed by the film industry in Michigan than before the subsidy program began.

The film subsidy program was signed into law on April 7, 2008. In that month there were 5,867 jobs in Michigan's "motion picture and sound recording industries," the industrial classification that most closely fits the target industry for the program. By last September these jobs had fallen to 5,290, a 9.8 percent decline. 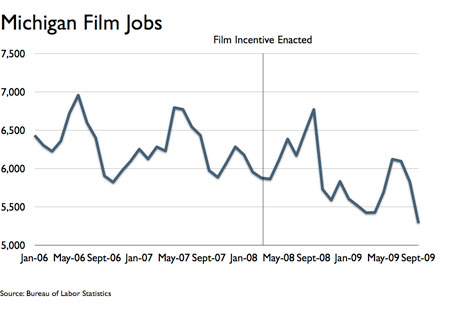 While the program's impact on the overall state economy is too small to measure, its effects on taxes and the budget are significant. The state has authorized $117 million in film credits, and the Department of Treasury estimates that the subsidies will cost $155 million in the upcoming fiscal year. This is equivalent to 7 percent of what the entire Michigan Business Tax currently extracts from businesses.

Film incentive supporters often point to particular jobs generated by the program's subsidies as evidence that it has been a success. In contrast, economic statistics are meant to summarize what has actually happened statewide, not merely assemble collections of anecdotes. While the film incentive program has succeeded at making this very small piece of the state's economy more visible, the actual data shows that it has failed even to increase the overall number of film jobs in the state, let alone provide a source of growth for any other industry.

*The BLS does have a survey that releases monthly job figures with only a one-month lag, but the information raises privacy concerns when there are few firms and little employment. Despite having the most generous film incentive program in the country, Michigan's film industry still doesn't have enough companies and jobs to qualify for disclosure via this survey.