(Editor's note: This is the second in an occasional series analyzing myths about school funding in Michigan. The first, about the school foundation allowance, can be found here.)

With Michigan's economy in decline and families departing the state in increasing numbers, tax revenues that pay for our public schools are also falling. Because employee compensation costs consume around 80 percent of most school districts' operating budgets, and also include unsustainable retirement benefit provisions, the Legislature is considering proposals to reduce these expenses.

Notwithstanding fiscal and economic realities, the Michigan Education Association, the state's largest school employee union, has pulled out all the stops in its efforts to shut down any reforms in this area. One of the union's tools is a claim that school employees have already made "$1 billion worth" of concessions over the last three years.

The data, however, fail to show any significant reduction in public school labor costs.

Typical of the union's claims was a 2009 Detroit News column written by MEA President Iris Salters, stating that school employees saved taxpayers $200 million in salary concessions and another $700 million in health insurance reductions over the last three years. The MEA has repeated this claim a number of times, including in recent radio and television advertisements. Only the televised ads cite the source for the claim, referencing the Michigan Department of Education Financial Information Database.

Those "$1 billion in savings," however, are not found in these statistics. Instead, they show that Michigan public schools spent $13.758 billion on school employee compensation in 2006. In 2008 (the latest year available), the number had increased by $39 million to $13.797 billion. 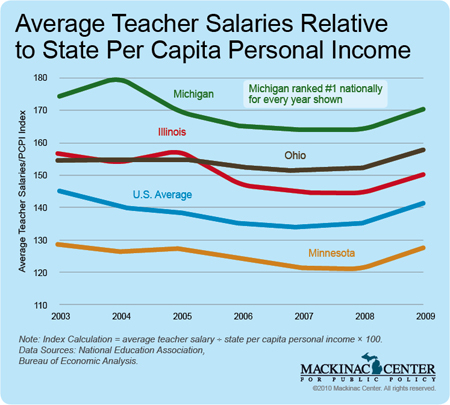 In absolute terms, inflation-adjusted school employee compensation increases have been relatively modest. Compared to the economic devastation and income loss suffered by the rest of the state over the past decade, however, those increases assume a different character.

From 2000 to 2008, the per capita personal income of Michigan's population plummeted by nearly 5 percent after adjusting for inflation. Total private-sector earnings from 2000 to 2008 — which includes both employee compensation and profits earned by businesses — fell a whopping 12.8 percent in the state, according to the Bureau of Economic Analysis. Not surprisingly, the government's ability to afford those generous school compensation packages also diminished, with total state tax revenues down 7 percent from 2000 to 2008 after adjusting for inflation. 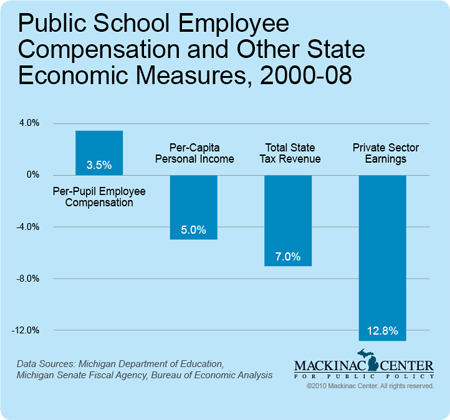 School employees earning more than the rest of the taxpaying population is nothing new in Michigan. In 1996, the Citizen's Research Council of Michigan reported that, in proportion to the per capita personal income of taxpayers that support their salaries and benefits, Michigan teachers had the highest pay in the nation.

The most recent data available show that Michigan again ranks number one in the country by this measure, and has done so since the 2003-2004 school year.

Michigan's economy and the economic well-being of its population have declined dramatically over the last decade. Contrary to union claims, however, there has been no "shared sacrifice" by school employees. If anything, compared to the rest of us, their relative well-being in economic terms has likely never been better.

Michael Van Beek is director of education policy at the Mackinac Center for Public Policy, a research and educational institute headquartered in Midland, Mich. Permission to reprint in whole or in part is hereby granted, provided that the author and the Center are properly cited.