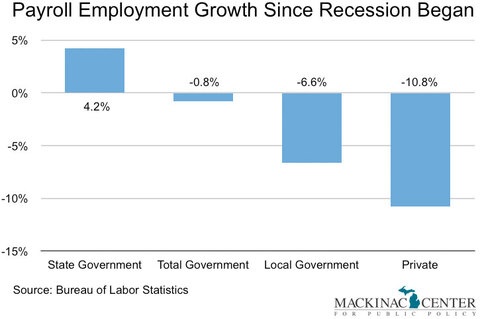 Since the beginning of the national recession in December 2007, Michigan's private sector has lost 70 times more jobs than its government sector.

Specifically, there are now 388,100 fewer Michigan's private sector payroll jobs as measured by the Bureau of Labor Statistics, while government payrolls (which include federal, state, municipal and school employees) are down by just 5,400 jobs.

Of course the private sector provides many more jobs than the public sector, but even on a percentage basis the magnitude of the discrepancy is startling: Private-sector employment in Michigan fell by 11 percent, while there are just 1 percent fewer government workers than before the recession.

At the state government level there are actually more employees, the increase mostly driven by larger state university payrolls. But there has also been some growth in the state bureaucracy. According to state workforce reports, the number of state "classified" jobs (civil servants, mostly unionized) has actually risen 3.4 percent since the beginning of the recession. There may be some seasonality in these figures, but even comparing December 2007 to December 2009 shows a slight increase.

Thankfully, in the most recent year Michigan's private sector rebounded slightly. Private payrolls went up 0.7 percent while government employment fell 0.3 percent, even with an increase of temporary Census workers in recent months.