Michigan state government will spend another $47.9 million in federal stimulus money under a bill recently signed by the governor. As with previous state expenditures of this type, Michigan Senate Bill 1166 draws this money from the $787 billion American Recovery and Reinvestment Act of 2009. More familiarly known as the "Federal Stimulus Bill," this measure was supported by the president and most Democrats in Congress, and was opposed by every single Republican in the U.S. House and all but three Republican U.S. Senators.

To many Democrats, the stimulus and its various spending components are a signature accomplishment of the president's first year in office. On the other side, opposition to this spending has become one of the single largest causes of the grassroots "tea party" movement that has sprung up across the nation.

Republicans in the Michigan Legislature were more supportive of spending this latest chunk of the stimulus pie than their federal counterparts were toward baking the $787 billion spending pie in the first place. In the Michigan House, Republicans split right down the middle, with 21 voting for SB 1166 and 21 voting against it. One House Democrat, Rep. Coleman Young Jr. of Detroit, bucked an otherwise supportive Democrat caucus and also voted "no."

In the Michigan Senate, all but two Republicans voted in favor of the $47.9 million appropriation of stimulus spending. Democrats all voted in favor.

Detroit and other large cities in Michigan would be the biggest winners from this new spending. According to a Senate Fiscal Agency memo, $30 million of SB 1166's spending will go toward "energy efficiency improvement" projects, with a large portion of that going to "central city" buildings in Detroit, Grand Rapids and elsewhere.  The money would be used to provide "energy efficiency" retrofits for private residences, commercial buildings and public buildings.

Michigan's $30 million share of this spending comes from a $400 million U.S. Dept. of Energy grant program that is funded from the federal stimulus act.

The Senate Fiscal Agency reports that the remaining $17.9 million from SB 1166 will be used to "support maintenance and demolition of tax-reverted properties" in Detroit, Grand Rapids, Hamtramck, Highland Park, Pontiac and Wyandotte.

On July 1, both chambers of the Legislature approved this spending. SB 1166 was signed into law by the governor on July 21. The MichiganVotes.org roll call votes for this bill are listed below. 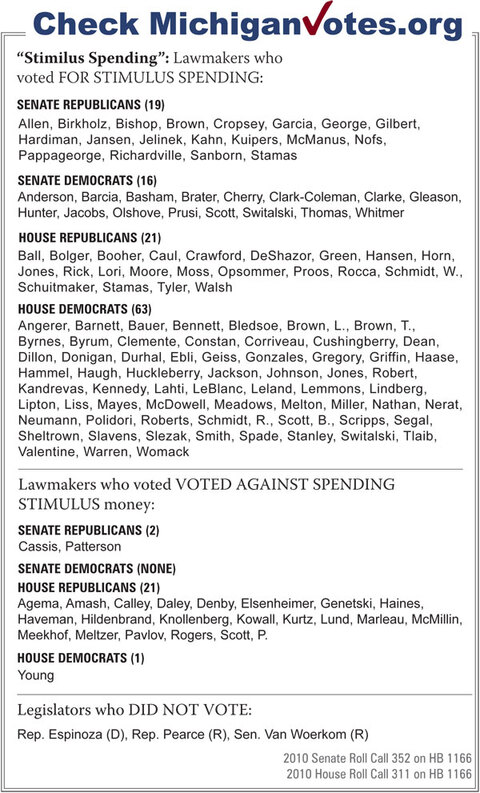 The original version of this story was posted online on Aug. 2, 2010.