The Bureau of Economic Analysis recently released a key measure of economic growth that showed Michigan has gone more than a decade without increased production. New gross domestic product figures, a measure of the value of an area’s goods and services production, showed that Michigan’s economy produced 8 percent less in 2009 than it did in 2000 when adjusted for inflation. The nation rose 15 percent during this period.

Michigan now ranks 42nd in per capita state Gross Domestic Product, the measure of goods and services production, down from 21st in 2000.

The state performed worse than every other state but Nevada and Arizona in per capita GDP growth from 2008 to 2009.

While there have been some signs of improvement in Michigan’s economy lately, figures like this show just how much Michigan has struggled. 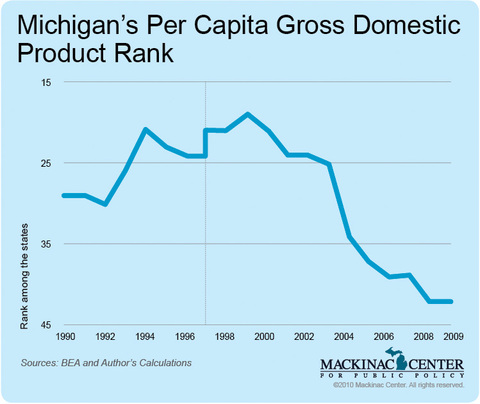