During a three-month period ending last September, 190,661 Michigan jobs disappeared. That’s nearly one out of every 20 jobs in the state.

So why weren’t there headlines about an employment apocalypse? Because during the same period 227,785 new jobs were created here. This “job churn” is typical of the dynamic U.S. economy and labor market, and it goes on continuously.

Michigan’s “one-state recession” of the past decade occurred not because no new jobs were created, but because more jobs disappeared: 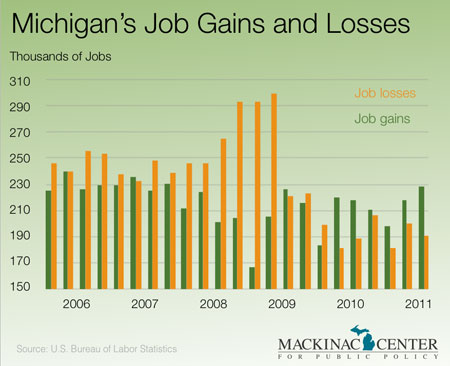 Among other lessons, job-churn figures expose the absurdity of state corporate welfare schemes granting tax breaks and subsidies to a handful of politically-favored firms or industries.

During that same three-month period last summer, officials at the Michigan Economic Development Corporation granted special subsidy deals to firms promising 3,696 jobs, on the theory that giving discriminatory favors for a handful of companies is the way to grow Michigan’s economy. Past experience shows that only one-third of those promised jobs will ever actually happen, or around 1,087.

227,785 vs. 1,087.  Seems like a waste of time and money to hand out those special favors. Not to mention the potential for corruption and actual erosion of the rule of law this activity represents.

These numbers reveal that to get the kind of job creation numbers needed to compensate for the jobs that disappear, it’s necessary to make the state’s overall tax, regulatory and labor law regimes more attractive to all employers, not just a select few.

Government corporate welfare schemes are not an “economic development” program that benefits the people of a state, but rather a political development one that benefits politicians and a handful of special interests. When a politician boasts of some firm opening a plant due to discriminatory “incentives” he approved, the sound he hears should hear is boos, not cheers.