The Michigan Senate Fiscal Agency expects that state government spending from all sources for fiscal 2008 will be $42.8 billion — the highest annual state spending in Michigan history and a $937.6 million increase over the previous fiscal year. The vast majority of this additional spending is possible because of the $1.358 billion tax hike approved by Michigan law-makers and the governor last fall. However, despite an agreement to cut $433 million in spending if higher taxes were approved, and dire warnings of "massive cuts" if the taxes were not raised, only seven of the 17 appropriation bills enacted for 2008 carry a smaller price tag than what was originally enacted for the previous budget year.

The discrepancy between promised cuts and the reality of $937.6 million in additional spending can be explained by the phrase "current services budget." Simply put, this is the government assumption that the current year’s budget should provide everything the previous year’s budget did and do it much the same way, with whatever dollars are necessary to get it done. For the most part, no allowance is made for identifying and eliminating needless services or finding more efficient ways to provide services through the use of privatization and other efficiencies.

Once this price of "current services" is calculated for the next fiscal year, nearly all deviations downward are defined as a "cut," even though total spending increases. For example, lawmakers and the governor agreed to "cut" $55.6 million from the current services budget for the Department of Corrections, but the reality for taxpayers is that the price tag for prisons in 2008 will be $138 million more than what was originally enacted for 2007.

The alternative is to assume that some programs can be eliminated, that government need not do things the same expensive way every year, and that state workers may have to share in the state’s economic hardships, rather than receive a raise like this year’s $150 million payroll increase. The real per-capita personal income of Michigan taxpayers fell by almost 1 percent from 2001 through 2006. According to the Michigan Department of Labor and Economic Growth, the average state civil service worker was paid 18 percent more than the average private-sector employee as recently as 2005. Is a raise for state workers in 2008 an essential service?

McHugh asserts that neither liberals nor conservatives prefer overpriced prisons and police, so this budget is not an ideological battlefield. Rather, the real dispute is between taxpayers and the government employee unions whose interests are at stake if raises are not given, or if government jobs are outsourced to private-sector providers. While conceding that few Michigan residents knew about it, McHugh recounts the "loud demonstrations, e-mail campaigns, and uncompromising letters" that these unions used to exert "powerful pressure" on lawmakers to raise taxes and increase spending. "When the governor announced her budget back in February," he writes, "public-sector union members in T-shirts were already handing out fliers supporting tax increases as an alternative to budget cuts." In short, public employee unions drove the process that led to record-setting budgets in 2008.

As noted, 10 of 17 budget bills for 2008 appropriated more money than what was originally enacted for the previous budget year. The total spending increase for these 10 bills is $1.47 billion. Of the 148 lawmakers in both chambers of the Legislature, 114 voted to approve at least $1 billion of that extra spending, and 41 voted for it all. The name of each state lawmaker and the amount of spending above the previous year that they voted to approve from those 10 budget bills is below.

FOR FURTHER READING:
McHugh’s analysis of the 2008 budget may be read in its entirety at www.mackinac.org/9122.

A proposal that would save money in the state police budget may be found atwww.mackinac.org/5949. A comparison of state employee compensation to the private sector is located at www.mackinac.org/8207. 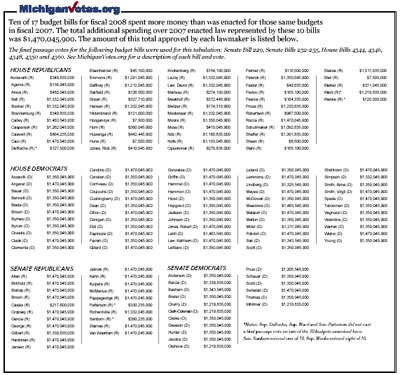