Under a bill approved by the Michigan House of Representatives on Feb. 12, 2008, a government commission would be created and empowered to devise a system of standards for "pay equity" between different occupations. This system would determine — to use just one of limitless examples — whether the work produced by a plumber is worth more or less than that of a nurse, and would also create a comparable wage for each type of job based on those findings. After devising such a system, the commission would then be required to report to the Legislature recommendations for laws that would impose its findings on Michigan employers.

House Bill 4627, the legislation that would create the commission, does not specify a limitation on its scope. Much of the committee testimony both for and against the bill implicitly assumed that the commission could and would (or should) devise a pay equity standard with jurisdiction over both public- and private-sector employers.

This was one of three pay equity bills written about in the November/December, 2007 Michigan Capitol Confidential: "Bills Would Put the State in Charge of Setting Private Salaries." Because the bills collectively have 49 co-sponsors and need only 56 votes to pass, the article rightly observed that the full House of Representatives might attempt to ratify some version of the pay equity concept.

As it happened, House Bill 4627 narrowly passed when one GOP lawmaker joined 56 Democrats in support, while 50 lawmakers — all Republicans — voted "no." The legislation has been sent to the Senate Commerce and Tourism Committee, chaired by Sen. Jason Allen, R-Traverse City.

One of these organizations — the Michigan Farm Bureau — submitted a letter of opposition to the bill and the entire concept of pay equity. In the same sentence that acknowledged support for including the Bureau on the commission, the organization stated that this would not "alter our fundamental opposition with the legislation." That opposition was rooted in the Bureau’s belief that "a system that seeks to establish comparable value between different types of work will have serious negative implications for agricultural producers."

Likewise, the National Federation of Independent Businesses and the Detroit Regional Chamber of Commerce — business organizations that would not get a seat on the commission — also opposed the bill.

Several of the organizations that would get a seat on the commission submitted letters of support for the bill.

"Workers in female dominated jobs," according to the AFL-CIO endorsement letter, "are paid less than similar workers in jobs not dominated by women."

A letter of support from the National Organization for Women cited sex stereotyping and undervaluing of women as two of many reasons why women working in different jobs than men are paid differently. Attempting to counter the accusation that a government commission is ill-suited to determine the correct market wage for vastly dissimilar occupations, NOW suggested a point system that the organization believes could be used to value every job as objectively as when a shopper compares apples to oranges by weighing them, counting calories and adding up nutritional value.

The NOW example suggests assigning scores based upon how much each job requires of a worker in five categories: skill, responsibility, effort, education/training and working conditions. These are the same criteria that House Bill 4627 instructs the proposed pay equity commission to use. Using the NOW example, crafting a point system for each job category would be followed by the commission suggesting laws that would assure that jobs scoring the same would pay the same.

Writing in 2001 about a Minnesota law that imposed a pay equity system only on municipal government workers, Lawrence W. Reed, president of the Mackinac Center for Public Policy, critiqued its impact on the city of St. Paul: "$32 million in additional salary expense between 1985 and 1992, endless disputes about who is comparable to whom, and lingering uncertainty as to whether the city is in compliance with the law." He cites a University of Virginia study which found that the ensuing disruptions in the Minnesota labor market artificially cut wages for computer specialists and nurses, creating shortages in both fields. Reed pointed out that the outcome from imposing such a standard on both public and private employers would be to "arbitrarily and effectively abolish the role of supply and demand in the labor market."

The Michiganvotes.org vote tally for House Bill 4627 is below.

For additional information regarding this issue, please see www.mackinac.org/9448. 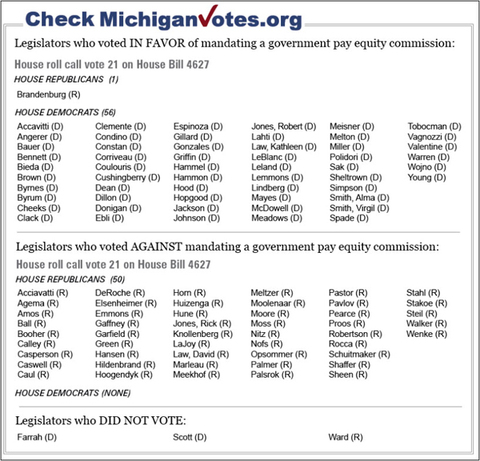