Michigan revenue estimators believe that the state treasury will end the fiscal year with around $900 million left in the bank. Lawmakers are going to talk about what to do with some of this surplus, and other topics, as they start to budget for the next year. And they’re going to find that they have more to spend as economic growth continues to drive tax collections higher.

The state economy has been headed in the right direction. Unemployment is the lowest since 2000. Michigan has added 619,800 jobs in this recovery, a 16% increase. Median household income is up 25% from 2009 lows (not adjusted for inflation), and the state poverty rate declined from 17.5% to 14.1%. Michigan’s per-capita personal income ranked 32nd among all states in the latest ranking; that’s up from 40th. The value of all goods and services produced in Michigan is up 24% from 2009 to 2018, when adjusted for inflation. 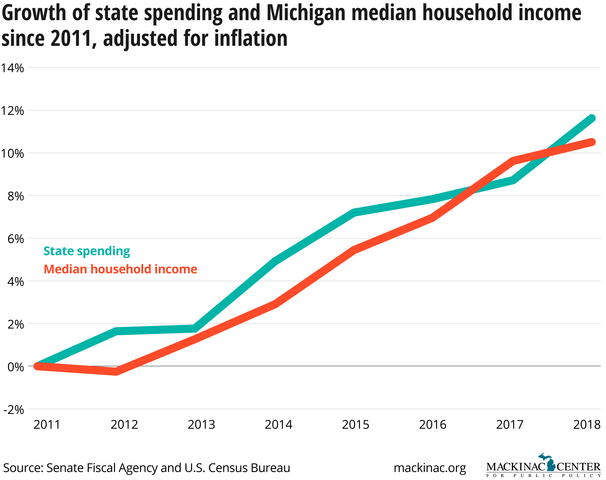 Yes, there have been some policy changes over time that changed the amount collected. Gov. Rick Snyder’s 2011 tax reforms are kind of a wash and tended to increase tax individual income tax collections and decrease business tax collections. Then there were the 2015 fuel and registration tax hikes. But the bulk of the change in state revenue is from economic gains.

It is an open question about what lawmakers are going to do with the extra cash flowing into Lansing. Republican leaders in the Legislature wanted gains to be used to improve road conditions, but the governor vetoed $375 million of the transportation budget, causing a decline in annual spending.

These revenue trends are an important reminder: While tax policy discussions are important, the biggest driver of state revenue comes not from the changes made in tax policy. It comes, rather, from people working more and earning more, and from the businesses in the state finding better ways to provide people with what they want. Michigan has been improving, and that improvement has made it easier to accomplish lawmakers’ budget priorities.